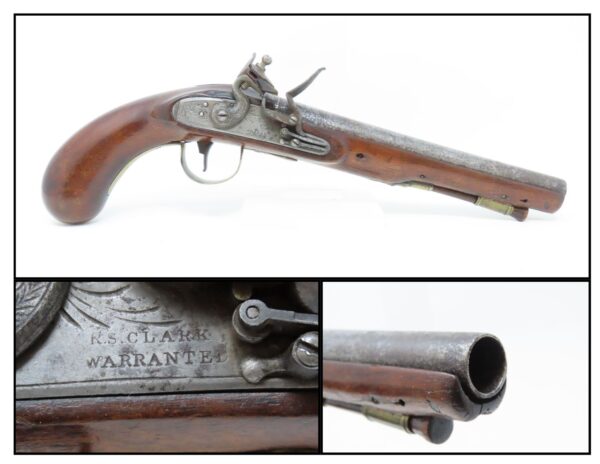 Here we present an antique R.S. Clark Marked Lock Flintlock Trade Pistol, made circa the early-19th Century in Birmingham, England. This London Gun maker was in business from around the 1810s until the 1840s. Gunmakers, including this one, were contracted with the Hudson Bay Company to supply these good quality flintlock pistols that were traded to the North American Indians, trappers, and traders in exchange for fur pelts that were eagerly desired in the European Fashion Trade.

The Hudson Bay company was founded in May of 1670 primarily serving in the fur trading industry in its early years and has continued for 350 years to present day in London, England.

This pistol features a .66 caliber smooth bore. It is a simple and effective weapon that would have “R.S. CLARK/WARRANTED” engraved on the lock. There are Birmingham proof marks on either side of a “tombstone” marking which is found on many of the trade specific guns.

The overall condition is good to very good. The action is strong and tight, and it will spark. Good bore for its age, smooth and gray. Nice, solid stock that has some weakness and splitting at the muzzle.