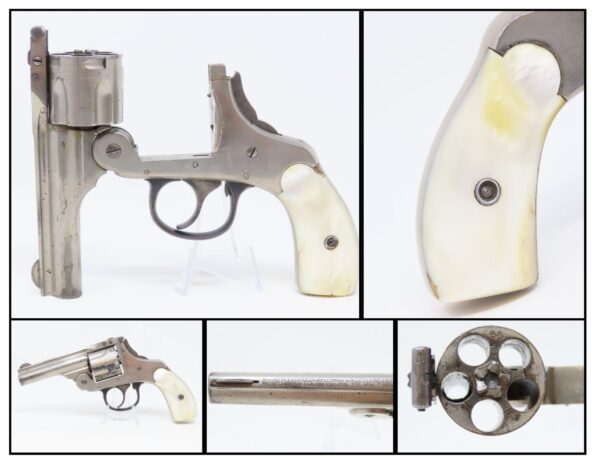 Turn of the Century Self Defense Weapon with PEARL GRIPS!

This 5-shot revolver would have been ideal to keep in one’s waistband or holster for self-defense in the turbulent early 20th Century. In fact, in one famous incident, Alessandro Berardelli was an armed guard transporting the Slater-Morrill Shoe Company payroll in Braintree, Massachusetts on April 15, 1920 when he and another employee were ambushed, robbed and killed. Berardelli was carrying an H&R .38 revolver like this one. Two Italian immigrant anarchists, Nicola Sacco & Bartolomeo Vanzetti, were arrested and the guard’s gun recovered from Vanzetti. Both were found guilty, though controversy haunted the convictions and anarchists retaliated by killing scores via bombs, most notably the Wall Street Bombing. These men and select events were memorialized by folk singer Woody Guthrie, who was sympathetic to their cause.

The overall condition is nearing fine. The action is strong and tight. The bore is mostly bright and in good condition. The mother of pearl grips are vibrant. Bright, original nickel finish. A handsome piece of early-20th Century steel.