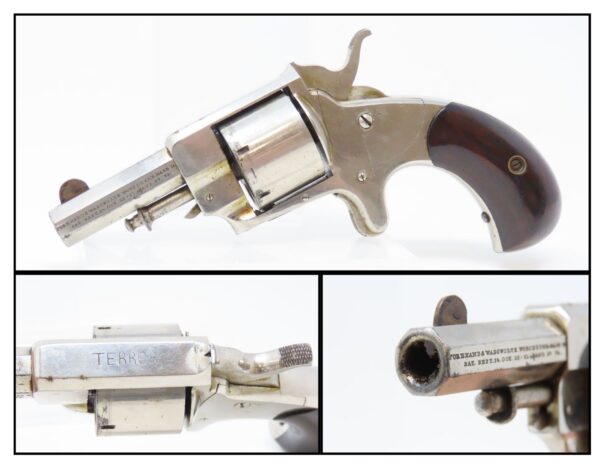 Here we present an antique Forehand & Wadsworth “TERROR” .32 Caliber Spur Trigger Single Action Revolver, made circa 1880 with a production run from circa 1876 to the late 1880s in Worchester, Massachusetts. The revolver was a small, self-defense weapon, ideal for potent conceal and carry in the closing decades of the tumultuous 19th Century.  It was made by the sons-in-law of Ethan Allen, the successful firearms inventor and manufacturer from the 1830s.  This little revolver features a single action spur trigger and six shots of .32 rimfire.  This top strap is marked “TERROR”.

It was not until 1948 that the term “Suicide Special” was coined and proliferated by Duncan McConnel in his article for the NRA’s American Rifleman. 10 years later in 1958 Donald Blake Webster published his book about them, Suicide Specials. There were quite literally dozens of companies making these at the end of the 19th century, curiously being “trade named” all sorts of things, for example: Terror, Defender, Blue Jacket, Red Jacket, Electric, Smoker and many more! They are typically rimfire and have the spur trigger, much like their progenitor the S&W No. 1 Revolver. Though they do not have the name recognition of Colt’s, Smith & Wesson and Remington, they still represent a period in American history and present an opportunity for collectors with relatively minimal investment.

The overall condition is very fine! Fully functioning action, although the cylinder indexes intermittently. Bright bore with slight frosting. Both the bore and cylinder contain excess cosmoline. Numbers match. Sharp markings. Fine grips with below average wear. Here is a truly fine, antique, self-defense revovler that anyone would be proud to collect!