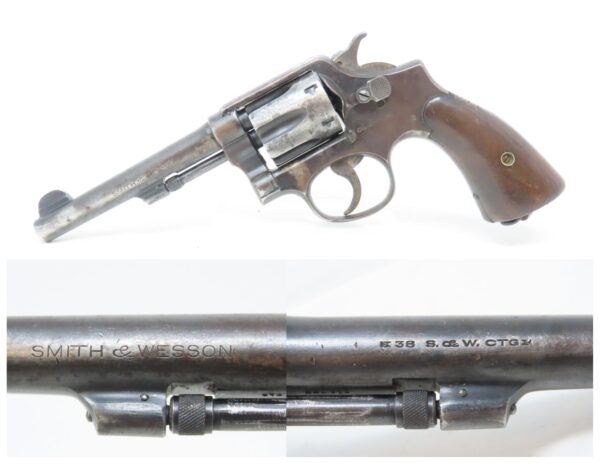 Here we present a C&R New Zealand Marked Smith & Wesson “Victory” Model .38 Special Revolver, made mid-WWII in Springfield, Massachusetts. The Victory model was so named for the “V” prefix which was placed before the serial number and represented “Victory” against the Axis powers in World War II. Serial numbers for the .38 Special Victory model began at about V1 in early 1942 and ran until VS811119 with a date of late August of 1945 (end of production).

Crane and crane recess are also serial numbered to each other, but this is a different number than the revolvers serial number, as is correct for Victory model revolvers. The Victory Revolver was produced throughout most of World War II and is a variation of the Military & Police Model of 1905. The Victory model revolvers participated in various roles from guard duty to riding in a shoulder holster with fighter and bomber pilots. To this day the Victory model is a very enjoyable shooting collectible, mainly due to its inexpensive cost, light recoil, and good accuracy.

The overall condition is good+. Original finish/patina. The numbers match. The action is excellent in both double and single action. The bore is shiny bright with sharp rifling. The walnut grips are in good shape and show honest wear. There are 4 “kill” notches in the back of the left grip panel. One wonders what this revolver may have seen!