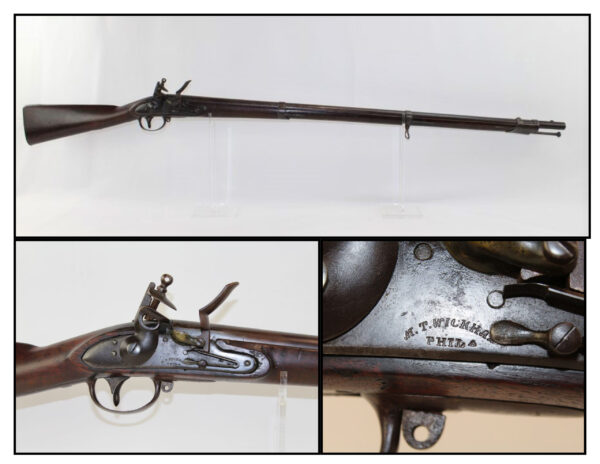 Here we present an antique New Jersey marked Wickham Model 1816 Musket manufactured in Philadelphia, Pennsylvania by Marine T. Wickham, and was typically used by the militia in the early 1800s. “Probably the most notable armorer to work at Harpers Ferry before 1816 was Wickham. Residing in Philadelphia, Wickham served as an inspector of contract arms and general troubleshooter at the national armory between 1811 and 1816. Wickham possessed great talent as a gunsmith. More important, he exhibited a rare ability to manage men effectively while at the same time retaining their admiration and respect. Wickham decided to enter the world of private business after the War of 1812. Upon resigning his inspectorship in 1816, he took over an existing musket contract with the United States and later that year signed his first regular contract for 4,000 arms at $14 a stand. Then, on July 19, 1822, he signed a contract with the U.S. Ordinance Department for 5,000 Model 1816 muskets at $12 per stand, delivered at the rate of 2,000 per year starting on January 1, 1823. In December of 1823, he undertook an additional contract for 10,000 muskets beginning on July 1, 1824. Not surprisingly two of his largest accounts were the Harpers Ferry and Springfield armories. Both ventures prospered and Wickham continued to garner wealth from them until his death in 1834. His rise from an obscure country workshop to a leading arms manufacturer and businessman was a truly impressive achievement.

This particular example went to fill the local armory in Sussex, New Jersey as is demonstrated by the markings. Other muskets have been discovered so marked and are very rare. The Sussex Brigade was instituted in 1768 and continued through the American Civil War, militias being the backbone of the US military throughout that period as there was a profound distrust of a standing army. The lock is marked “M.T. WICKHAM PHILA”. The stock and barrel are marked “S.N.J.” for Sussex County New Jersey. The stock is also marked “SUSSEX BRIGADE” quite deeply. The barrel is view and proof marked “GF”, “P” and “US”.

The overall condition is very good. The iron parts bear an even, dark patina. The markings are clear. The walnut stock has been restored where it was fractured. The bore is smooth and clean. The action is still functional! Here is a great piece of US and New Jersey history here in a very hard to find musket!