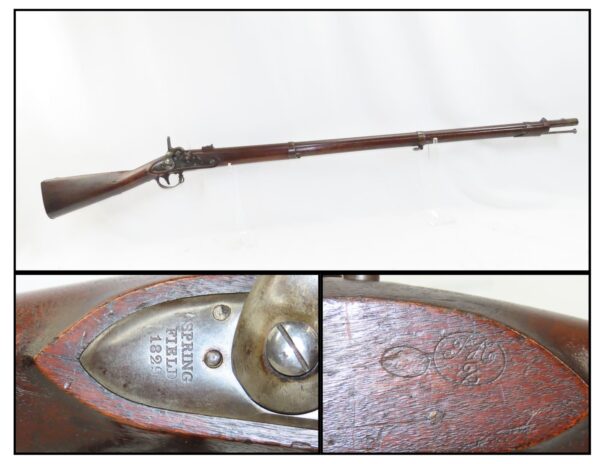 Here we present an antique Springfield U.S. Model 1816 Percussion Musket, manufactured in Springfield, Massachusetts circa 1829 and was converted to percussion for the New Jersey Militia by Hewes and Phillips circa 1861.

While many M1816 flintlock muskets saw conversion to percussion in the Civil War period, almost no other saw the level of update this musket received. The flash pan and frizzen were removed from the lock and all the holes filled and ground down flush with the face. You will notice that the markings were also slightly effaced in the process. A very large bolster was welded to the barrel and a percussion nipple threaded in. A percussion hammer that is unique to this model was installed. The barrel was rifled. A new front barrel band replaced the old so that there was a good front sight for the rifle and a mutli-leaf sight was installed at the rear. A bayonet lug was installed on the top near the muzzle. Hewes & Philips numbered their parts, and you will see the number “1” throughout, to include the nipple bolster, the hammer, the bayonet lug, rear sight, etc. The top of the barrel shows the company markings “H&P” and the date of the conversion 1861. A large “P” on the barrel and a long cartouche at the rear of the comb of the stock are probably New Jersey inspector markings. A large “NJ” for New Jersey is also visible where the barrel meets the stock on the left side. This is a fantastic piece for so many reasons and is the epitome of a musket that saw lots of use.

Hewes and Phillips began their business in the manufacture of steam engines in New York City in 1845 and transferred to Newark, New Jersey, the following year. After two more moves the company was settled in its Civil War location at the foot of Orange Street, facing the Passaic River. Here the muskets were converted, and some 400 hands were employed. These are known dated 1861. The musket work was done concurrently with that of producing motive steam machinery for the Federal Navy.

The overall condition is near fine. Original brown finish/patina. The action is excellent. The bore is clean and reflective with sharp rifling. The walnut stock is smooth and solid with clear cartouches. This is a fabulous example of a scarce and highly refined version of the converted US Model 1816!