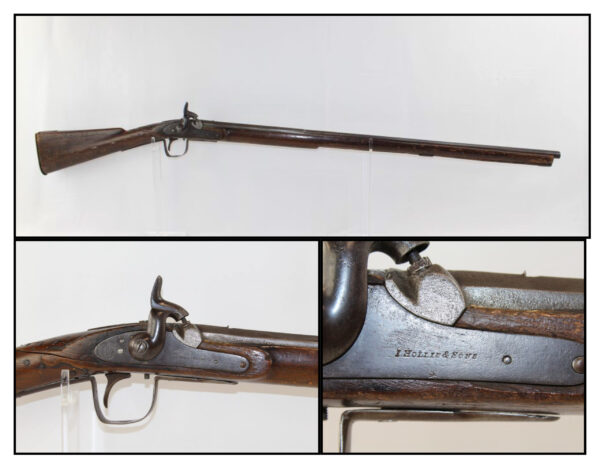 Here we present an antique Native American Trade Musket by Isaac Hollis & Sons, made circa the mid-19th Century in Birmingham, England before being exported to the United States. These muskets would have been made to be trade items to isolated tribes throughout the growing United States and the practice actually predates the US as a country. Muskets and long rifles were still in use at this time, though this was a period of great firearms technology development during which cartridge firearms and soon repeaters would become common. These would have been relatively inexpensive to manufacture and purchase and highly desirable to Native Americans who did not have access to many firearms, much less those on the cutting edge of technology. These tend to have been used hard and faced massive attrition due to conflict and exposure to the elements, even as this one demonstrates.

This trade musket features the hallmarks of such firearms made for trade with the Natives, including serpentine side-plate on the left side of the gun as well as a smooth bore and enlarged trigger guard. The lock is marked “I. HOLLIS & SONS” at the front and “GUN MAKERS TO HER MAJESTY’S WAR DEPARTMENT” in a circular motif around the monogram of “I.H.&S.” British proofs are visible on the left side of the barrel. As noted above, this one shows every sign of being used hard and being consistently exposed to the elements. There is even a very clear chop to the side of the stock where a knife, tomahawk or sword hit it and has smoothed over with use and time. The wrist has been expediently repaired. It is amazing that under such conditions anything would have survived.

The overall condition is good for the type. The iron parts have a gray patina throughout. The markings are clear. The stock has the period frontier repair. The bore is smooth and dusty. The action is strong. This is a fairly modest musket that has been there and done that and remains an important and tangible piece of American history.