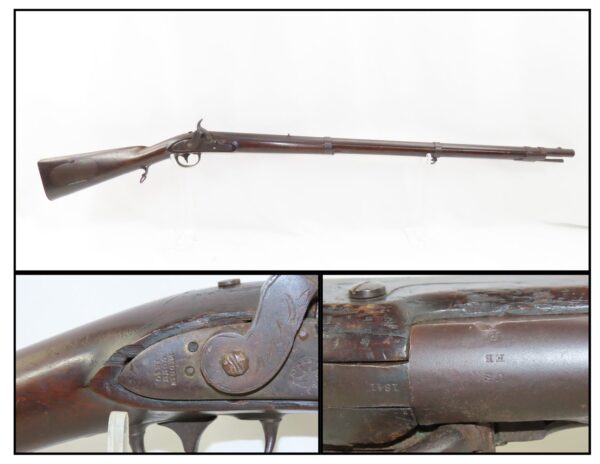 Here we present an antique U.S. Model 1817 “Common Rifle” from the Nathan Starr Contract, made circa 1841 in Philadelphia, Pennsylvania. This example would have started out life and converted to flintlock, likely around the time of the American Civil War. The M1817 common rifle was issued due to the Dept. of Ordnance’s order of 1814, produced and used from the 1820s to 1840s on the American frontier. The 36-inch barrel is rifled for .54 caliber rounds. Like the Model 1814, it had a large oval patchbox in the buttstock. Many of these were used during the American Civil War, especially in the early days of the conflict when military weapons were hard to come by.

Over time, these rifles became obsolete, but they still saw service during the Civil War. While all were originally flintlocks, most, as is this one, were converted to percussion cap for their firing mechanism.

The overall condition is good. This piece is virtually untouched since the period of use. Strong action. Both the nipple and the skirt of the hammer are a bit peened. Good bore for its age with strong rifling. The walnut stock is solid with two partially visible cartouches on the left wrist. “1840” dated lock with “1841” on the barrel. A neat rifle—one of the few we have seen not bored out to a large caliber—and with an interesting Civil War period conversion.