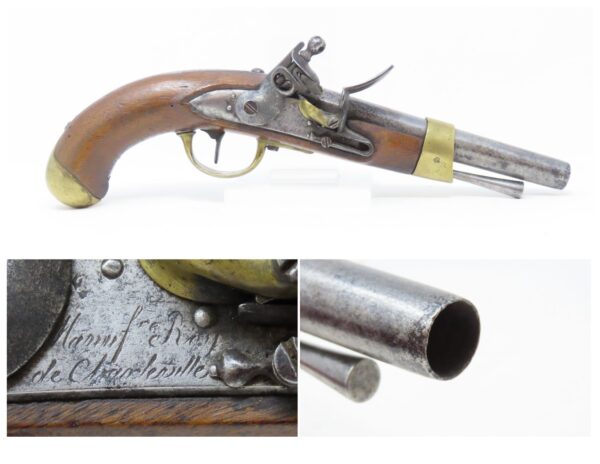 Here we present an antique French Pistolet modèle An XIII, or Pistol Model An 13, made at the Charleville Arsenal in France between 1806 and 1814. This is the Classic Military Flintlock Pistol of the Napoleonic era, made at the IMPERIAL ARSENAL at CHARLEVILLE, an Arms Manufacturing installation in Charleville-Mézières, Ardennes, France, to the northeast of Paris.

This model was manufactured at all three of the French Arsenals, Charleville, Maubeuge, and St-Etienne. This pistol was made as a cavalry pistol and continues to survive in its original flintlock state! Over 300,000 of these pistols were made during their 8 year production run. This pistol was designed to equip mounted units, each horseman using two pistols. It was also used by the Navy. An improved version, known as the M1822, was produced after the Napoleonic Wars. Proving that imitation is the greatest form of flattery, the Americans copied the design as the “Harpers Ferry Pistol” and used it against the British in the War of 1812. This pistol is of robust construction with lots of brass for support. The bore is a massive .69 caliber.

The overall condition is good. Excellent action, original flintlock. The bore is clear and remains in good shape for its age. Legible markings. The grip/stock is in good shape with expected wear. An “1814” dated cartouche is stamped on the left wrist. “1814” dated barrel.