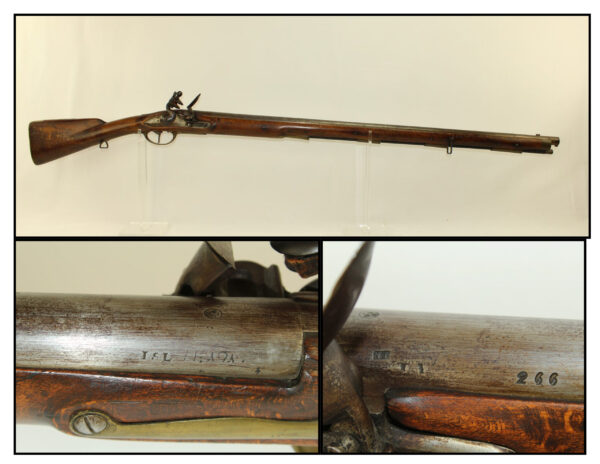 Here we present an antique Flintlock Military Rifle-Musket, based on the British Brown Bess Musket, made circa 1790 in Liege. Liege has been a firearms-making center since about 1505, contracting with various nations throughout the world to provide small arms for their militaries. Liege was, from 1431 to 1789, a Prince-Bishopric ruled by a series of Prince-Bishops. Liege would undergo a period of transition when in 1792 it was annexed by the Kingdom of France, then the Kingdom of Netherlands in 1815. Belgium did not exist as a state until 1830.

This musket is very clearly based on the British Brown Bess (1722-1838) with its bandless barrel held by pins, with a similar lock, and stock profile, though there are some notable differences. The bore is distinctly rifled and will take about a .70 caliber ball. There are two bayonet lugs, one on top and one just behind the muzzle and under the barrel. The stock bears much resemblance to the Brown Bess until the butt stock, which is square and broad with a broad, flat butt plate that features some simple curves upon the tang.

The top of the barrel is Liege proof marked, and there is a small “NT” stamp in a box, which is almost certainly a maker’s mark. The left side of the barrel is marked first “I5L” in block letters, then something like “11.A9A.” in an unusual font nearer the breech. Either or both of these markings may well be unit markings as they are a combination of letters and numbers. The number “266” repeats throughout as a sort of serial or assembly number.

The maker’s mark “NT” may very well be for Liege gunmaker Jean-Claude Nicquet, who took over his family’s gunmaking business in the 18th Century, and who made Brown Bess type muskets for the British (as well as for the Colonials) during the American Revolutionary War. His firm also made rifles for the Liege Revolutionary Council amongst many others. This rifle bears much resemblance to many of the Brown Bess style muskets used during this period by a variety of nation-states to include the Kingdom of Denmark. This rifle would very likely have seen service during the Napoleonic Wars.

The overall condition is very good. The iron parts are semi-bright. The markings are clear. The numbers match. The stock is in near fine shape. Fine bore with strong rifling. The action remains strong. Here is a very interesting Liegeouis take on the British Brown Bess!