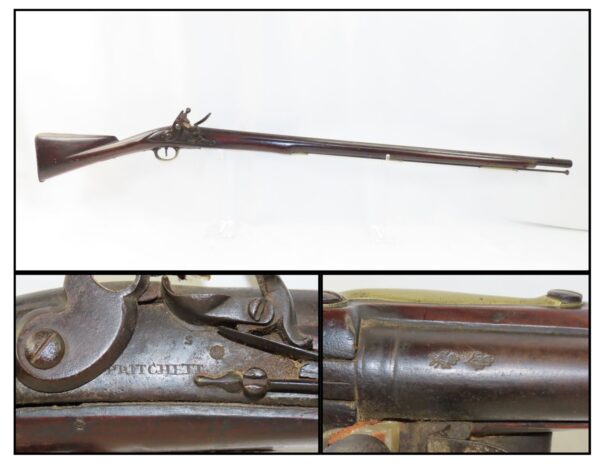 Here we present an antique Brown Bess Flintlock Musket by Pritchett, made in England circa the late-1700s/early-1800s. This iconic British Military Longarm would have started out life as a flintlock and converted to percussion as the more reliable firing system was introduced. This pattern of Brown Bess is the same that fought Napoleon Bonaparte in numerous iconic battles, as well as the United States and their American Indian Allies during the War of 1812. This pattern may also correctly be called the “India Pattern” since the Honorable East India Company was the entity responsible for this update to the gun that had been around since 1722. When war with France loomed on the horizon, the British Board of Ordnance diverted these muskets from the EIC contract to supply the war effort.

The overall condition is very good. Strong action. Smooth bore. The walnut stock is solid, though it has a couple of grafts along the barrel and in front of the lock. The area around the fore end cap also has a small repair. Birmingham proofs. “PRITCHETT” marked lock. A neat piece of British history.