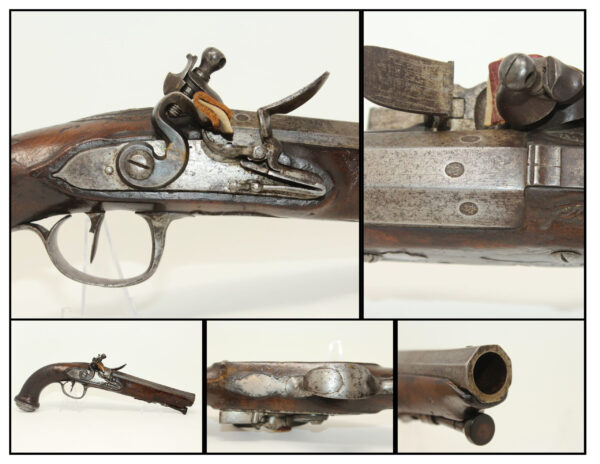 Here we present an antique French Flintlock Officer’s Pistol, made circa the early 1800s. The First French Empire (officially the French Empire) was the empire of Napoleon Bonaparte of France and the dominant power in much of continental Europe at the beginning of the 19th century. A series of wars, known collectively as the Napoleonic Wars, extended French influence to much of Western Europe and into Poland. At its height in 1812, the French Empire had 130 departments, ruled over 70 million subjects, maintained an extensive military presence in Germany, Italy, Spain, and the Duchy of Warsaw, and counted Prussia and Austria as nominal allies.

This pistol is full-sized and has a .69 caliber bore. Iron hardware throughout. The barrel is octagonal and swells at the muzzle. The stock feels good in the hand and is both hand-checkered and has some light carving around the barrel tang. This handsome pistol would have been most at home in a saddle mounted pommel holster when not punching large holes. This would have been the type of pistol an officer purchased on his own to bring to battle in case he was to come into contact with the enemy. The pistol has Jean Nicolas Leclerc maker’s marks on the barrel. Ramrod has a worm on the interior end.

The overall condition is good. The iron parts are gray with age. If you look closely you can see there is an old repair of the cock. The markings are clear. The wooden stock is dark with age. There is a crack at the midpoint of the barrel that does not move around. The bore is dark and smooth. The action is excellent, strong and crisp. This is a wonderful pistol that looks like it has been through a war and survived to tell the tale. Leclerc’s wares are very difficult to find today, especially in North America.