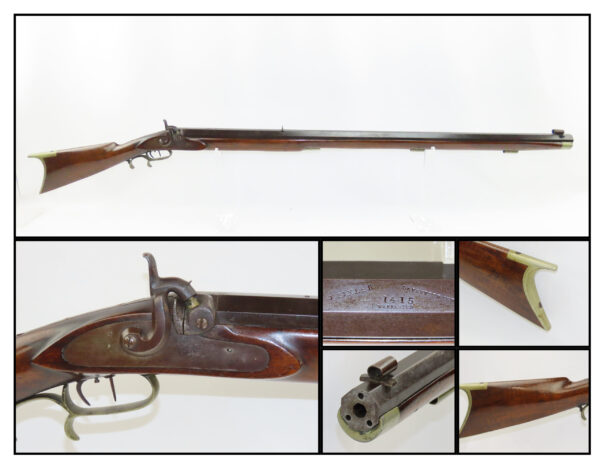 Made in Lafayette, Indiana Circa the 1880s

Here we present an antique John Bixler Heavy Precision Long Rifle, made circa the mid-to-late-19th Century. John Bixler of Ohio began his career around the 1840s. He partnered with Samuel Iddings in Lafayette, Indiana circa 1850-1880.

In an odd turn of events during 1863 with the Civil War still raging, Bixler and Iddings business disappeared for a time. Despite their unblemished reputation in the community, they were falsely accused and arrested for “treasonous activity.” As the story goes, on March 4th, 1863, a 60th Indiana Infantry deserter, Reuben Stout, shot and killed another solider, Solomon Huffman. Huffman had intended to report Stout to the military authorities for said desertion, as Stout was hiding in his brother’s upstairs apartment in Carrol County. Indeed, there was a witness, as W. I. McAfee accompanied Huffman at the time of the shooting. McAfee heard a shout, “Go Back,” followed by two shots and Huffman tumbling down the stairs. Later during Reuben Stout’s interrogation, using what some described as “creative and imaginative” lies, he led the Federal Marshals to believe Bixler and Iddings were the actual culprits and part of a larger Confederate conspiracy. Stout accused them of being southern sympathizers and helping the Confederates. Of course, the truth came out as the two gunsmiths were released, but nevertheless lost plenty of valuable manufacturing time during the war.

This hearty rifle weighs a solid 19.2 lbs. The barrel was cut for a false muzzle and equipped with double set triggers. With its weight and feature set, it would have been a good rifle for precision shooting for either competition or hunting out on the plains. “J. BIXLER LAFAYETTE IND/1415/WARRANTED” is marked atop the barrel. Its hefty octagonal barrel is in .44 caliber. The front sight is a dovetailed globe style fine post and bead inside a hood. The rear sight is a large open sight. There is evidence that this rifle may once have utilized one of the long, slender early telescopic sights. German silver hardware for the butt plate, trigger guard, ramrod tubes, and nose cap.

The overall condition is very good. The action is strong. The bore is clean and remains in great shape. The stock is smooth and solid throughout with the exception of a short split near the muzzle cap. The ramrod is absent. A great, heavy precision rifle from Indiana!