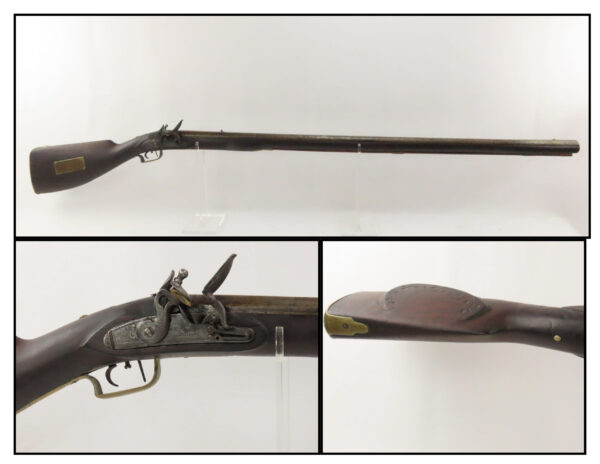 Here we present an antique Flintlock Rampart Rifle (also known as a Wall Gun or Amusette), made circa the late 1700s to the early 1800s. Rampart guns were used primarily in the 16th through the 18th centuries by defending forces to break the advance of enemy troops. However, these were also useful as this was a man-portable firearm, albeit a large one, that could be taken where artillery could not be such as through heavily forested areas or even over water in small crafts. Basically, it was a scaled-up version of the standard infantry musket, operating under the same principle but with a bore of up to one inch. These types of weapons filled the gap in firepower between the musket and the light artillery pieces, such as the swivel gun. This gun’s barrel is nearly 4 feet by itself! This helped carry large projectiles such as this for longer distances as it allowed a greater powder charge to burn before the projectile left the barrel. This one comes in .82 caliber, features double set triggers, and has a modestly embellished cheek piece on the stock. These were also used during the American Revolutionary War.

The overall condition is Very Good. The action is strong. The bore is dark with visible rifling. The stock is solid with a few minor slivers along the sides of the barrel. An extremely hearty and solid rifle best fired from some sort of rest. The lock clearly reads “Warranted”. This rifle is impressive, and will no doubt, make an impression on any collection!