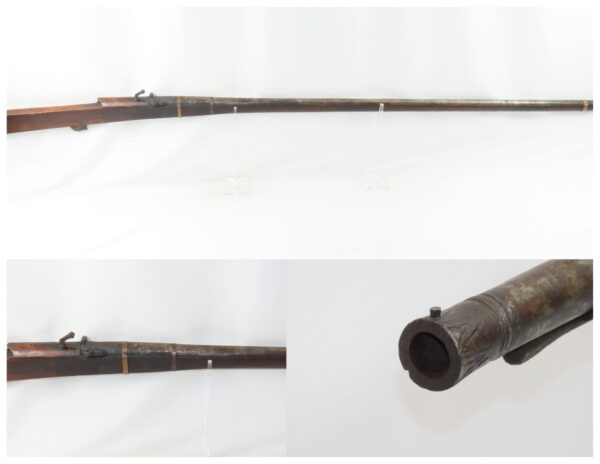 Here we present an antique Indian Toradar Matchlock Smooth Bore Musket, made circa the 18th century in India. They were found mostly in the Mughal-influenced Northern and Central India. Emperor Akbar the Great was the Mughal ruler during the late half of the 16th Century. He was known for his many accomplishments, among which was the expansion of his empire. He was a great leader and military commander, but he also benefitted by adopting and developing firearms technology. Production and use of matchlock firearms greatly increased under his guidance, giving him an enormous advantage over those he would conquer. The Mughal Empire would finally succumb to the British in 1858. The matchlock would see its apex from the late 16th Century to about the mid-18th Century.

The gun is a type of smoothbore firearm used in the 16th through 18th centuries by defending forces to break the advance of enemy troops. Essentially, it was a scaled-up version of the army’s standard infantry musket, but with a bore of up to one-inch (25.4 mm) caliber. These weapons filled a gap in firepower between the musket and the lightest artillery pieces, such as the swivel gun. This sort of weapon may also be found described as an amusette, rampart gun, or Hackbut, a name originally given to early medieval hand cannon.

The overall condition is good. The action is strong. The bore is dim and caked with probably centuries’ worth of dust. The stock has a few shallow splits that pose no risk to the overall structure, and is solid otherwise. “289” is stamped on the left side of the buttstock. “JPR/EXR/5166” can be found on the breech. These are probably some sort of registration or exportation marking. An interesting and very long weapon!