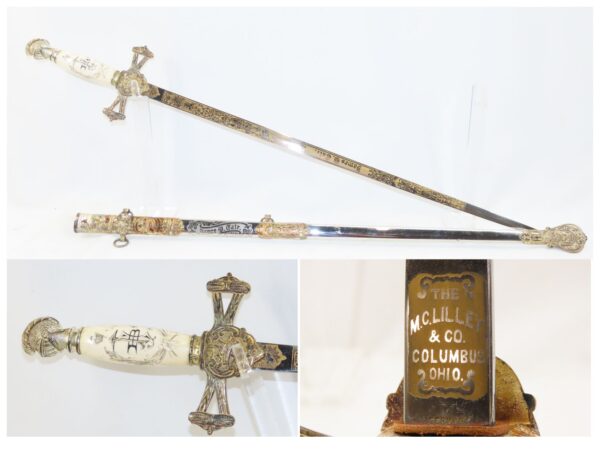 Here we present an antique The M.C. Lilley & Co. Masonic Knights Templar Fraternal Order Sword, personalized for James B. Tate of the Allegheny, Pennsylvania, made circa the 19-teens by The M.C. Lilley Company of Columbus, Ohio. The Pittsburgh Post-Gazette from December 1, 1915 shows James B. Tate as being initiated into the commandery along with 26 others on November 30 of that year.

Every knight needs a sword, with less ancient fraternal orders being no exception. The sword played, and still plays, an important role as a symbol of the power to destroy, as well as the power to protect, and dispense justice. They were a key part of dress and served as status symbols within the society. Most are quite decorative, if not utterly ornate.

This sword features a knight’s head on the pommel, archetypal of the swords employed by the Knights Templar and Knights of Pythias. Christian symbolism abounds on most examples. Decorative scroll and other Masonic themes are often found on these types of swords. The ivory grip bears the initials of the owner.

The overall condition is fine.