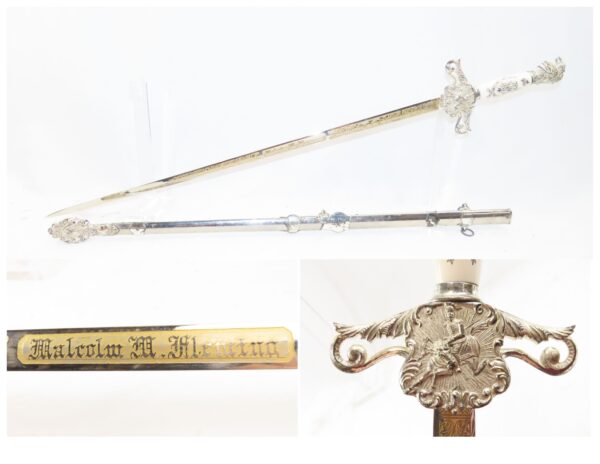 Here we present an antique Masonic Knights Templar Sword Personalized for Malcolm M. Fleming of the Talbot Commandery No. 43 of Oil City, Pennsylvania, made circa the 1920s by William H. Horstmann of Philadelphia, Pennsylvania. Every knight needs a sword with less ancient fraternal orders being no exception. The sword played, and still plays, an important role as a symbol of the power to destroy, as well as the power to protect, and dispense justice. They were a key part of dress and served as status symbols within the society. Most are quite decorative, if not utterly ornate.

This one belonged to Malcolm M. Fleming of Fryburg, Pennsylvania, a close neighbor to Oil City. He grew up in New Bethlehem, PA and enlisted in the Army during the summer of 1918, though it seems the war ended before he saw action. He worked in Fryburg as a cashier at the First National Bank but also acted in many different roles with a number of seasonal traveling circuses including Hagenbeck and Wallace, Dodson’s World Fair Shows, Lewis Shows, King Brothers Circus, Dailey Brothers Circus, Bailey Brothers Circus, Biller Brothers Circus, H.Y. Barry’s British African Zoo, Great C.R. Montgomery’s Circus, and the King and Cole Brothers Shows combined. “Legal Adjuster” was just one of his many titles.

This sword features a knight’s head on the pommel, archetypal of the swords employed by the Knights Templar and Knights of Pythias. Christian symbolism abounds on most examples. Decorative scroll and other Masonic themes are often found on these types of swords. Ivory grip with the owner’s initials on it. Blade etched with the owner’s name and the name of his local commandery.

The overall condition is fine.