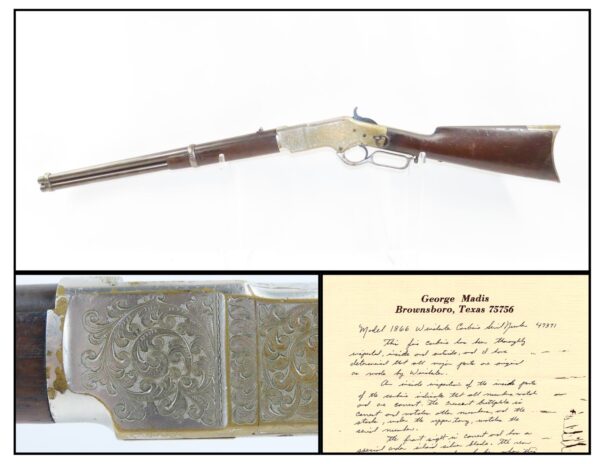 Here we present a Nimschke Engraved Antique Winchester Model 1866 “Yellowboy” Carbine, manufactured in New Haven, Connecticut in 1870. After the close of the American Civil War, the New Haven Arms Company became the Winchester Repeating Arms Company. One of its first orders of business was in revising and improving the Henry Rifle, which proved revolutionary to understate it. A new rifle was envisioned and became the lever-action repeating Winchester Model 1866. Known as the Yellowboy, due to its brass frame and hardware, this was the first Winchester lever action rifle. It remains absolutely iconic as the “gun that won the West”, being used by pioneers, Native Americans, cowboys, lawmen, and ne’er-do-wells alike. It is the cornerstone for many a historical collection. It was revolutionary for its time, though it was based on the Henry Rifle that saw limited use during the American Civil War. Winchester improved upon the weaknesses of that design to make a very reliable, sturdy, and accurate rifle with a high volume of fire. The magazine tube became totally enclosed from the elements and the frame-mounted loading gate was introduced, allowing quick reloads and the ability to top off the magazine. The Model 1866 proved an immediate success for Winchester, with around 170,000 guns going on to be manufactured. The 1866 appeared in three forms for the mass market. They were the carbine, rifle, and the musket. The carbine, as is this rifle, made up 127,000 of the guns produced, making it by far the most popular.

This fine carbine has been thoroughly inspected, inside and outside, and I have determined that all major parts are original or made by Winchester.

An inside inspection of the inside parts of the carbine indicate that all numbers match and are correct. The current buttplate is correct and matches other numbers [meaning that the crescent-shaped, rifle-type butt plate was special ordered for this gun], and the stock, under the upper tang, matches the serial numbers.

The front sight is correct and has a special order inlaid silver blade. The rear sight appears to have been broken when this Winchester was in use, so this is no great defect, and the saddle ring and it’s retaining staple are correct and original.

Although the engraving on number 47371 is unsigned, it is the work of L.D. Nimschke, one of the leading engravers in the days of the early Winchester. Geometric patterns on the receiver and buttplate are perfectly executed and show Nimschke’s hand. Entwined scrolls, sculpture on the scrolls, shading and backgrounds are all clearly Nimschke work.

There are traces of original nickel plating remaining on the bronze parts of this Winchester.

Overall the gun remains in good condition, showing use but no abuse. Number 47371 is a fine collector Winchester and deserves a place in any museum or collection.

The overall condition is very good. Strong nickel finish and original patina. The action is strong. The bore is in nice condition with good rifling. The walnut stock, like the rest of the gun, shows use and wear. There are small weather-related cracks throughout. The toe of the butt stock has seen a small repair and the butt stock has a little wobble around the tangs of the receiver. Madis said it well when he said that it “remains in good condition, showing use but no abuse.” This is a fantastic example of an early Winchester, engraved by Nimschke, and with a rare Madis letter that accompanies it.