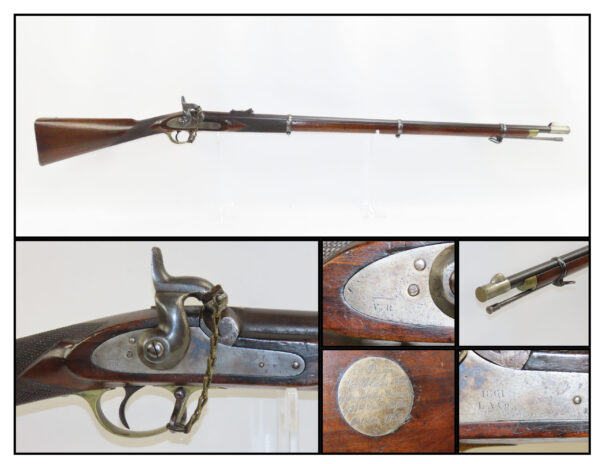 Here we present an antique London Armoury Co. Pattern 1853 Three Band Rifle-Musket, made circa 1863 in England. The P53 was the British Military Ordnance Board’s choice for adoption as the primary long arm in 1853. It was considered the apex European military gun of that time, introduced by the British War Department after several studies to improve the calibers and the dimensions of the previous models. However, it kept the same general appearance of the earlier pattern 1851. The overwhelming majority of Pattern 53 Rifles were made by commercial gun makers in Birmingham and London under contract.

This rifle was a deluxe special edition of this typically Spartan weapon as it was intended as a special prize for within a military unit. This one features nicer wood for the stock as well as checkering on both the wrist and the forestock. The silver placard on the left stock reads “2nd Place/1st Class Won/by Armstrong Crouch/of 33rd Middx. Rifles,/October 1862”. The lock is dated “1861” and reads “L A Co.” The 33rd Middlesex Rifles was a volunteer unit that originated during the Volunteer movement circa 1859—this in response to the Crimean War as well as heightened tensions between England and France and the outbreak of war between France & Austria. England had a lot of territory to cover between the British Isles and its colonies, and there was imminent risk of being pulled into another conflict. This was a popular movement to create part-time units at home, similar to what early Americans might have considered militias or what we now call the National Guard, Home Guard, etc. These had a great deal of autonomy initially, though many were eventually folded into the regular British Army.

The overall condition is very good. Great original blue on the barrel and strong case colors on the lock parts. The action is excellent. The bore is clean and bright! This example features unique checking on the wrist and forearm that remains sharp. Comes with the muzzle cover. A lovely piece of British history!