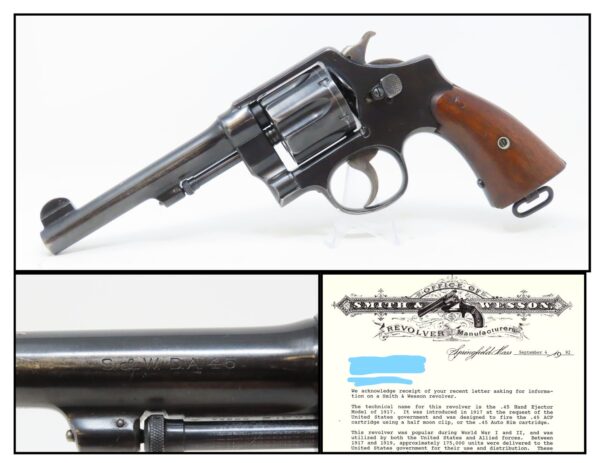 Here we present a Smith & Wesson Model 1917 double action revolver, made mid-WWI in 1918 in Springfield, Massachusetts. The M1917 Revolvers were six-shot, .45 ACP, large frame revolvers adopted by the United States Military in 1917, to supplement the standard .45 ACP M1911 pistol during World War I. There were two variations of the M1917, one made by Colt and the other made by Smith & Wesson. The Smith & Wesson Model 1917 was essentially an adaptation of that company’s Second Model .44 Hand Ejector, chambered instead for .45 ACP, employing a shortened cylinder allowing for use of half-moon clips, and a lanyard ring on the butt of the frame.

Smith & Wesson had recently produced the Hand Ejector, which uses their heavy .44 caliber frame, for the British Army in .455 Webley caliber due to shortages in British production facilities of standard-issue Webley Mk VI top-break revolvers. The S&W M1917 is distinguishable from the Colt M1917 in that the S&W cylinder had a shoulder machined into it to permit rimless .45 ACP cartridges to headspace on the case mouth (as with automatic pistols). The S&W M1917 could thus be used without the half-moon clips, though the empty cases would have to be poked-out manually through the cylinder face, since the extractor star cannot engage the rimless cases.

The overall condition is fine. As the factory letter states, this revolver was returned to the S&W factory in 1926 and it was re-blued at that time—there is also the factory refinish mark in the form of a star on the bottom of the grip frame near the lanyard ring. The action is strong and tight all the way around. The bore is bright! Both grips are solid. The numbers match. Here is a truly fine US military revolver from S&W!