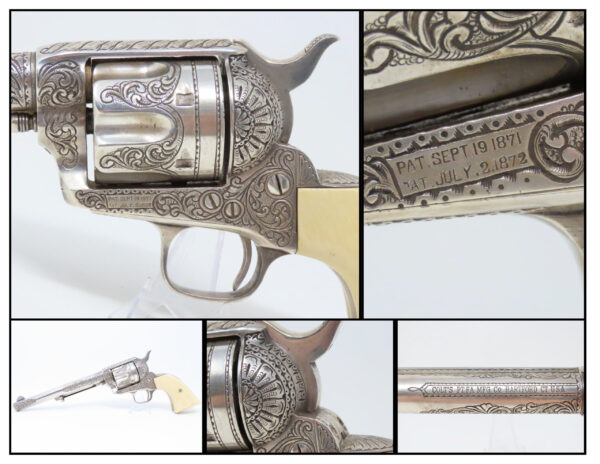 Here we present an antique Colt Black Powder Frame Single Action Army Revolver, manufactured in 1876 in Hartford, Connecticut. The accompanying factory letter lists this revolver with a blue finish, .45 caliber chambering, being listed when shipped to Schuyler, Hartley & Graham of New York City on September 27, 1876. Schuyler, Hartley & Graham was the largest firearm dealer in the United States in 1860 and continued for many years.

This revolver has been engraved throughout with a nickel finish. The engraving may be characterized by heavy scrolls with a punch-dotted background on the frame, cylinder and barrel. The loading gate and recoil shield bear a resemblance to halves of flowers. Simple alternating sawtooth and dot borders can be found at the muzzle and breech end of the barrel, as well as around the trigger guard. The entirety has been silver plated, for an exquisite look that subtly hints at its age. The grips are solid ivory with a spread eagle carved into the right panel. The initials “BJ” are stamped just in front of the trigger guard. This is typically how master engraver Bill Johns of Cody, Wyoming signs his work.

This revolver is said to have once been the personal sidearm of Texas Ranger, Captain Joe Brooks (1890-1940), though we were not able to verify that. In 1912, he worked as a Laredo motorcycle policeman and in 1913 was a Webb County deputy constable. Joe was a stockman, as many of the Texas men were. He enlisted in the Texas Rangers as a Regular Ranger from February 20, 1915 until February 15, 1923, as a private in Co. A, then reenlisted February 20, 1917, to January 10, 1919 and was transferred to a detached duty, and was a Ranger in Austin, Travis County, Texas. He reenlisted in the REGULAR RANGERS June 11, 1919, as a private in Headquarters Co. was promoted to sergeant, June 17, 1919 and was commissioned as Captain, October 1, 1919, then transferred to command Emergency Co No. 1, February 15, 1921. His commission expired February 15, 1923. He was then Captain of the wharf police, Galveston, Galveston County, Texas. Joe then reenlisted in the Texas Rangers as a Special Ranger from April 18, 1927 until April 16, 1928; April 10, 1928 until April 10, 1929; April 17, 1929 until April 16, 1930 to January 1, 1931. His commission was extended to January 20, 1933; from July 22, 1933 until 1935. He was made Captain in 1919. We were able to find an interesting account in the Laredo Weekly Times from 26 September 1920 in which Captain Brooks was mentioned by name as taking over command of the local police force as a result of the ending of martial law in Galveston during the Longshoremen’s Strike of 1920. In the article, he is described as being “well known in Laredo as a fearless officer, one who will do his duty in the proper manner, not adhering merely to the letter of the his orders, but using the same judgment in executing the commands of his superiors that has always characterized his service as a police officer in Laredo and as a Ranger officer in various parts of the state. He may be depended upon to protect all residents of Galveston to the fullest extent of his powers, whether they are strikers or strikebreakers and to insist upon the same respect for the law as was enforced by the presence of Guardsmen.”

The overall condition is very fine. Lovely silver finish throughout. The action is as strong as ever with all 4 clicks. The bore is bright and mirror-like. The engravings are sharp throughout. The ivory grips are smooth and solid. This is a simply gorgeous Colt from 1876 that may even have been used by a Ranger!