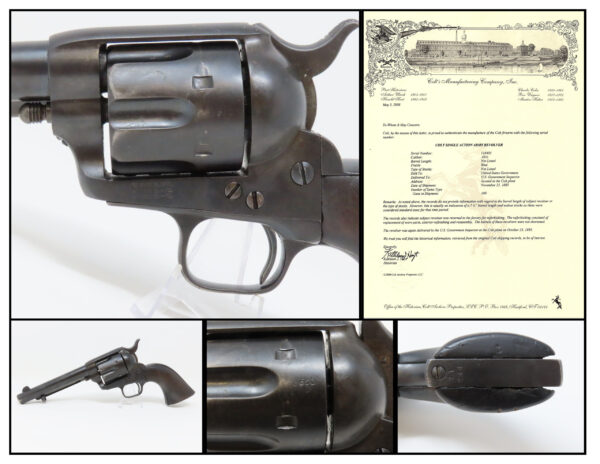 Here we present an antique lettered Colt Single Action Army Revolver Artillery Model, with the frame made in 1885. The Colt Single Action Army, or SAA, is a classic “six shooter” that is a worldwide icon of the United States of America and the Western Frontier. Wielded by both the worst of men and the best, the famous Single Action Army is also well-known as the Peacemaker. Introduced in 1873, the basic design remained, with a few interruptions, in production and is still manufactured today by Colt and other companies.

The included factory letter lists the revolver in its original cavalry configuration and a shipment date of November 25, 1885. It states that the revolver was returned to the warehouse for refurbishment in a batch of revolvers that didn’t have their barrels shortened (either a records error or barrel was later shortened) and subsequently shipped on October 23, 1895.

This one bears “P” proof marks on the barrel and cylinder as well as the inspector initials “G” on the trigger guard, “RAC” for Rinaldo A Carr on the cylinder, and “DFC” for David F Clark on the barrel.

The overall condition is very good. The action is strong and crisp. The bore is very fine; shiny bright with sharp rifling. There are two uniform notches on the bottom right side of the grip. The grips are worn and a bit shy but still solid. The numbers on this Artillery do not match as it was arsenal refurbished in the late 19th Century for further service into the 20th Century.