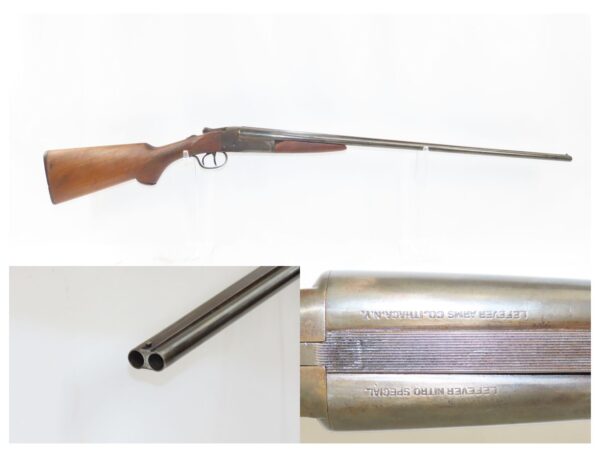 Here we present a C&R Lefever Arms Company “Nitro Special” 410 Gauge Double Barrel Side by Side Hammerless Shotgun made by the Ithaca Gun Company in Ithaca, New York in 1928 with a production run between 1921 and 1948. Sometime during 1916, Ithaca Gun company purchased the gun making assets of the Lefever Arms Company. Between then and World War I, they continued to manufacture the same sideplate gun that had been made in Syracuse until about 1919, when they were discontinued. During 1921, Ithaca Gun Company, under the name Lefever Arms Company, Inc., introduced a line of lower cost boxlock guns. Eventually, six different models were produced. Ithaca’s Lefever guns were produced in 12-, 16- and 20-gauge and .410 bore.

“Uncle” Dan Lefever was a hugely influential in firearms development and manufacture during the 19th Century, being the inventor of the hammerless shotgun among other things. He was born in Hopewell, New York in 1835, and by the age of 16 was apprenticing with John Cutler in Canadaigua, New York. By 1857, he hung out his own shingle for gunmaking, and by 1861, he was partnered with James Ellis, making precision muzzleloading rifles for the New York State Sharpshooters fighting the American Civil War. During this time, they were also known to have made fine combination guns, very practical weapons since an individual might only own one firearm and need it to serve multiple purposes and have more than one shot.