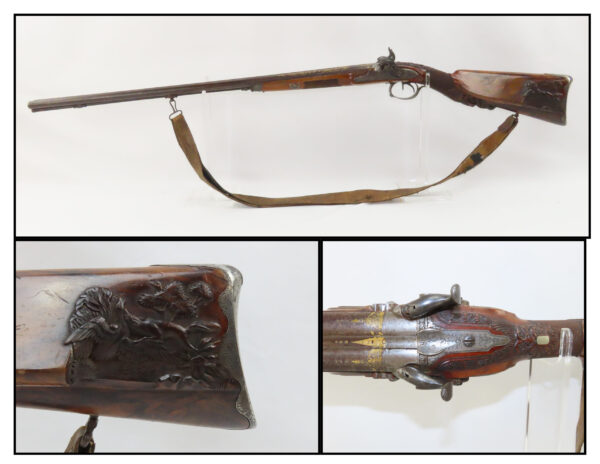 LE PAGE Side by Side Shotgun GUNMAKER to EMPEROR NAPOLEON BONAPARTE

Here we present an antique Jean LePage Double Barrel Fowling Piece, made circa 1804-1814. Le Page was a French firearms manufacturer established in Paris in 1717. Founded by Louis Pigny, the company remained in the same family until 1913. The brand’s unique and luxurious craftsmanship quickly gathered a royal and imperial clientele. In addition, the manufacturer’s commitment to the French Revolution together with recognition from authors also enhanced the prestige of the brand.

Jean Le Page (1746-1834) was in charge of the company between 1779 and 1822. During this time the business saw further expansion of the firearms manufacturing business. Aside from Napoleon Bonaparte, the company also included King Louis XVI, the House of Orleans, and King Louis XVIII as its clients. He came to Paris with the initial goal of becoming a chemist. He ended up starting his training at Pierre Le Page in 1764. His training lasted four years. By 1779, he succeeded his uncle who gave him his letter of mastery in 1780. Le Page’s store was at number 13, rue de Richelieu (which became number 950 rue de la Loi during the period of the Revolution), near the Palais Royal which strategically placed it in the midst of the action in 1789 and in 1830. It appears that the family played an active role in preparing for the Take of the Bastille and in the Trois Glorieuses by distributing firearms to the people.

This piece would have been made in the flintlock format before being professionally updated during the period to the newer, more reliable percussion format. As you can see, hammers were specially made for the occasion and the transformation appears seamless. The double is graceful and handles well. The twin bores measure approximately .59 caliber at the muzzles. The stock is nicely figured walnut that has been hand-carved and hand-checkered. The pistol grip transitions to the underside of the buttstock with a beast’s head. The left side of the stock has been high-relief carved with a panel scene of a fox nabbing a goose in the field. The butt plate is finely engraved on the tang with an interesting vining scroll with a goose perched atop, and the sides reach into the stock with scalloped designs. The left side of the stock has provision for a cheek rest. The top of the wrist is inset with a small silver plate which is engulfed by a hideous face. The barrel has nice embellishments over the breech and gold accented writing that announces the maker as “Le Page A Paris/Arqer de LEmpereur”, the latter meaning the gunmaker of the Emperor, who was Napoleon Bonaparte. Each lock bears half of the inscription of the barrels. Bands of gold at the muzzle as well. This is the crème of the crop as far as firearms, art, and history are concerned. A true piece of history that you can cherish and preserve for the next generation.

The overall condition is very good. Both actions are strong. Both bores are smooth and somewhat reflective. The stock is sound and solid. The sling is in very good shape for its age. An epic beauty the likes of which Le Page repeatedly performed!