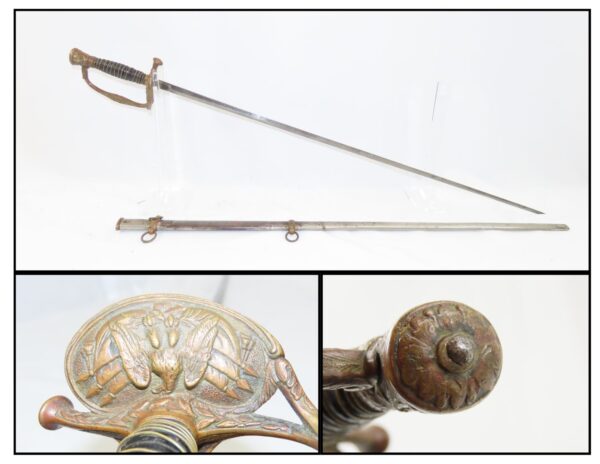 Here we present an antique U.S. Marked Officer’s Style Dress Sword, made by M.C. Lilley & Co. of Columbus, Ohio. During the period from 1870-1910, over 20 percent of men in the United States belonged to a fraternal organization, which served various purposes such as mutual aid and insurance, political interests, social functions, and the comfort of stability and belonging in a dynamic post-Civil War society that was rapidly industrializing.

M.C. Lilley & Company was a Columbus, Ohio business that would benefit greatly as a manufacturer of ritual costumes and attire, including military themed dress swords after the war. By 1870, the company already occupied an entire four-story building on S. High Street, with a glass-fronted showroom and retail store on the first floor. This size of an operation positioned the company for tremendous growth and success in the coming “Golden Age of Fraternalism.” The most demanded and most commercially profitable form of military regalia, however, was the military-style uniform, which the company also produced for state militias, telegraph operators, and railway workers. This large-scale production of military regalia for fraternal organizations led to M.C. Lilley & Co. becoming one of the largest and most successful manufacturers in the world.

This sword features a 30 3/4″ straight blade with patriotic etching and an overall length of 36 inches.

The overall condition is good. Lightly oxidized, semi bright, etched blade. Both the hand guard and wire sit loosely around the tang. The scabbard is in good shape (missing the drag). Patriotic cast brass pommel and hand guard.