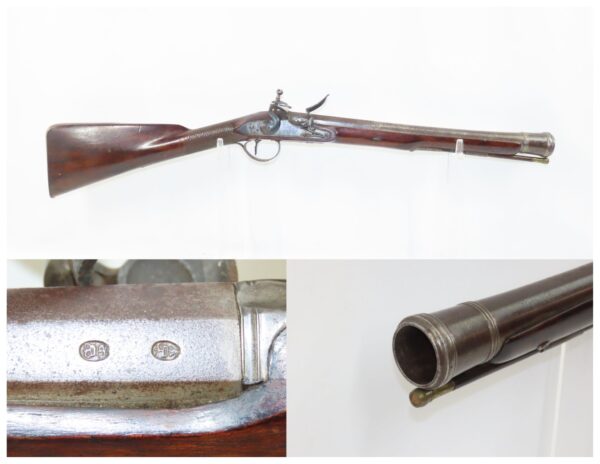 Here we present an antique John Collis Flintlock Blunderbuss, made 1782-1798 in London, England. This specimen is marked “COLLIS” and “OXFORD” on the lock. John Collis is known to have made flintlock pistols and blunderbusses during this period, possibly for officers in the British military. As mentioned, Collis became an active gunmaker beginning in 1782 and the Revolutionary War ended in 1783, so though unlikely, this could have used by Britain against the colonies seeking independence. But, even if it wasn’t used in the Revolutionary War, it is likely that this historical piece was used in the War of 1812 by the side that didn’t win!

The overall condition is very good. Patina throughout. The action is excellent. The bore is smooth and dim. The diameter of the muzzle is about 1 ¼ inches. The stock is smooth and solid. London proofs. A great example of a British Blunderbuss!