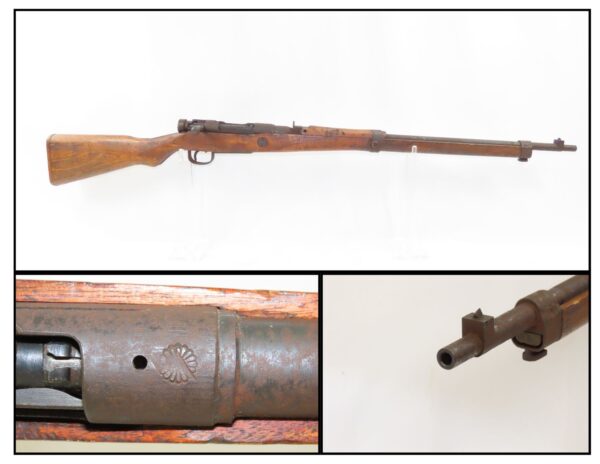 Here we present a C&R Japanese Nagoya Type 99 “Last Ditch” Arisaka Military Rifle manufactured circa 1945 at the Toriimatsu Arsenal in Nagoya, Japan. The Nagoya Arsenal was a collection of five major military facilities located in and around Nagoya, Japan. It produced various Japanese army and air war equipment during World War II including the Arisaka Type 99 rifle. Specific arsenal facilities were built in Nagoya, Atsuta, Chikusa, Takagi, and Toriimatsu.

The Type 99 was one of the standard bolt-action combat rifles to be used by the Japanese Empire during World War II. At the start of its production, it proved a reliable and robust rifle. But, the closing noose of the Pacific Theater soon brought about dramatic changes in its production methods, often leading to a subclass weapon. The Type 99 had several variants that included the Short Rifle, Long Rifle, an airborne variant and a dedicated sniper model. Production lasted from 1939 into 1945 before ending with Japan’s surrender.

The overall condition is good. Strong action. The bore is bright. Solid stock throughout (contains above average wear, many dents and dings). The numbers on the bolt and receiver match. This example has the mum struck. The butt plate is simply made of wood due to material shortages. This is a great specimen of just how basic these rifles got as the US & Allies starved the island nation of raw materials.