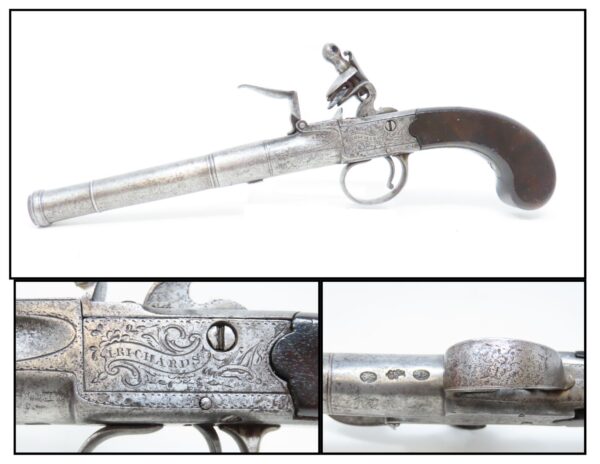 Here we present an antique John Richards Screw On “Cannon Barrel” Flintlock Pistol, made circa late 1700s to early 1800s in turn of the century London, England. “I [for “J” in the older style English font] RICHARDS” is engraved on the left frame with “STRAND LONDON” on the left. John Richards’ opened shop circa 1775 on the Strand and he moved his shop around several times during his career. He became a master gunmaker circa 1781 and practiced his craft until his death in 1821.

This piece is quite large for this style of pistol, usually being of pocket size. Made in the Queen Anne style, this one is a gaping .58 caliber with an approximately 5-1/4-inch-long barrel and nearly 12” total length. Though long by today’s standards, this was still a relatively compact handgun that would have been concealable under clothing if need be. It would most likely have been at home in a holster or wedged behind a belt if not jammed in the top of a boot!

The overall condition is very good. The action is strong and tight. The bore is in good shape. The right side of the grip near the breech is missing a chip. This cannon barreled pistol will surely be a head turner when on display!