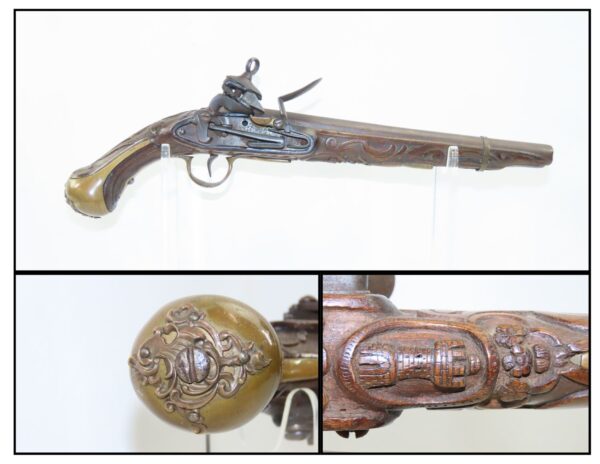 Here we present an antique Spanish Patilla, or “Militia” Miquelet Belt Pistol, made circa 1821 in Spain. The miquelet was an early and sturdy form of flintlock popular throughout Europe and the Ottoman Empire from the seventeenth into the early nineteenth century A “Miquelet” is a type of flintlock developed in Spain. It is a distinctive form of snaplock, originally as a flint-against-steel ignition form, once prevalent in Spain, Portugal, Italy, the Balkans, North Africa and the Ottoman Empire from the late 16th to the mid-19th centuries. The miquelet lock, with its combined battery and pan cover was the final innovative link that made the flintlock mechanism possible. It proved to be both the precursor and companion to what we now call the “true” flintlock. This pistol saw a lot of Spanish history pass in its lifetime.

This one is of martial size and has a large belt hook on the left side.

The overall condition is good. Good bore, there is a dent in the muzzle. Ramrod absent. The carvings make this piece truly stand out, and on the underside of the stock, a detailed emphasis seems to be given to the “rook”-like castle design. The action is strong. “1821 M 112” is marked atop the barrel.