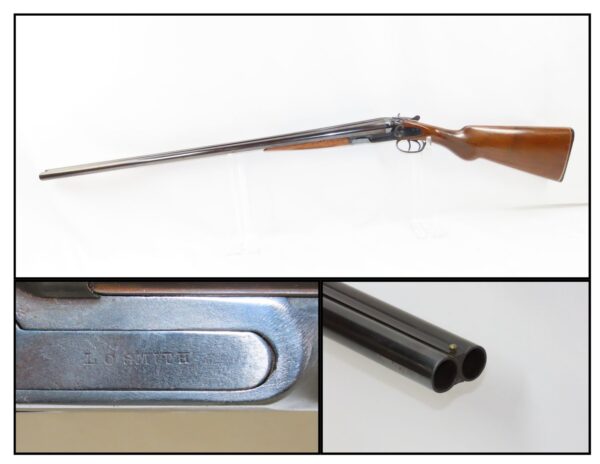 Here we present a C&R L.C. Smith Field Grade 12 Gauge Double Barrel Hammer Shotgun, manufactured circa the 1920s. The 1913 catalog said: “This gun is especially designed for those requiring a cheap, sound and plainly finished weapon. It is particularly useful for field and marsh where rough usage is required. The shooting powers of this gun can be relied upon to be fully equal to those of the higher grades. Featherweights are made in twelve-gauges as light as six and one-quarter pounds.” The price in 1913 was $25.

The era of the great American double-barreled shotgun lasted for almost 100 years, from shortly after the Civil War in the late 1860s until the middle of the 20th century. Grand old names like Parker, Fox, Ithaca, Winchester and L.C. Smith topped the list of the better double guns that were made in the United States. Each of these brands have many advocates, users and collectors.

The L.C. Smith Company has a rather complex history. Lyman Cornelius Smith and his older brother, Leroy, entered the gun business in partnership with William H. Baker in 1877 to manufacture the Baker series of shotguns. In 1880, Lyman (L.C.) Smith bought out his brother and William Baker. Leroy Smith, William Baker and some other partners went on to form Ithaca Gun Co. L.C. continued to make the Baker guns, which were marked “L.C. Smith, Maker of the Baker Gun.” The Baker models were phased out beginning in 1884, and by 1886 newly designed hammer and hammerless side-by-sides were being made by “L.C. Smith, Maker.” At about this time, L.C. was looking beyond the firearms industry for his next business venture. He was intrigued by the recent invention of a gadget that would eventually have as huge an impact on our culture as the firearm. It was called the typewriter, and Smith made the decision to sell his gun company and go into the typewriter business. In 1888 he sold the company to John Hunter of Fulton, New York, who formed the Hunter Arms Company and continued making the L.C. Smith shotguns in a new factory in Fulton. From 1889 until 1945, L.C. Smith shotguns were made by Hunter Arms Company.

The overall condition is very good. Strong actions. Extractor. The bores are in good shape and are reflective. Solid Fajen pistol grip walnut stock and butt plate. This is a Spartan shotgun that was refinished in order to keep it running in the field for a long time to come!