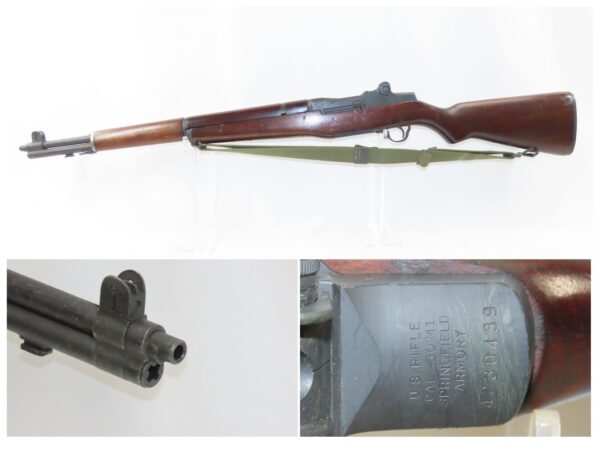 Here we present a Springfield U.S. M1 Garand Rifle, manufactured in 1951 at the Springfield Armory in Springfield, Massachusetts, with the Teflon finish. This .30-06 caliber semi-automatic rifle was that standard U.S. service rifle during World War II and the Korean War and also saw service during the Vietnam War. Most were issued to U.S. forces, though some were also provided as foreign aid to American allies. To say that it was and is highly regarded would be an understatement. In the words of General Patton, “In my opinion, the M1 rifle is the greatest battle implement ever devised.”

The finish on this rifle consists of a green undercoat and a slick black topcoat, consistent with the style of a “Teflon Garand” experimental anti-corrosion finish of 1950s vintage. It does have a slick Teflon feel to it and as you can see it does scratch or flake. Barrel is dated “51”. There is a small Springfield crossed cannons on the bottom of the pistol grip flat.

The overall condition is very good. The action is excellent. The bore is shiny bright with sharp rifling. The stock shows wear and remains solid. Clear markings. Includes a nice canvas sling. A rare specimen with this unique finish.