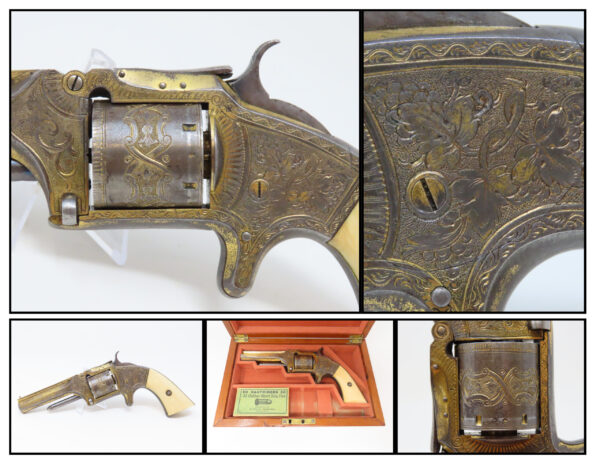 Here we present an antique John Dickson & Son Smith & Wesson Model 2 Old Model Revolver, made circa the 1870s. John Dickson (1794-1885) was apprenticed at age 12 to James Wallace in Edinburgh and set out his own shingle circa 1820. He and his son John (“& Son”) would be responsible for their very own “round action” invention that would distinguish them from their competition. They specialized in very fine shotguns and rifles, though they were known to make firearms of all sorts, even based on older systems and mechanisms. Proof of this lies in one especially interesting person they counted a prolific client: the Scottish eccentric Charles Gordon (1853-1918). He spent an outstanding sum with Dickson & Son between the years of 1868 and 1906—something like £10,000 on over 300 guns, rifles, and pistols, which would be roughly the equivalent of £1,300,000 in today’s values. Though his collecting habits centered on the Dicksons firm, and the Dicksons primarily made modern breech-loading shotguns and rifles, Gordon’s tastes increasingly tended toward obsolete designs, such as pinfires, percussions, and flintlocks. Many of them were cased and purportedly none of them fired.

This revolver was a carefully made recreation of the American gunmaker’s design. While it is unknown for whom it was made, this revolver is of superior quality—perhaps even better than the original by S&W—and lavish in its décor. Elaborate and fine engraving covers 60% of the piece, characterized by clusters of grapes on the central panels, Celtic knots along the backstrap, effusive scroll on the barrel, scallops around the barrel hinge and cylinder, and a delicate vining border around the frame. Extremely fine punch-dot backgrounds. The whole was gilded. The grips are of ivory.

“JOHN DICKSON & SON. EDINBURGH.” Is marked on the barrel rib. A set of proofs flank “N.C” on the upper left barrel flat. This example can be showcased from its apricot felt lined hardwood case that features a .32 caliber short rimfire box that reads “Manufactured for/QUINTANA HERMANOS,/Mexico, D.F.” No cartridges are contained within.

The overall condition is fine. Lovely gold finish. The action is strong. The bore is in very nice shape. Engravings on the frame and cylinder remain sharp. The grips are solid. The screw that would secure the ejector rod is absent, though the rod fits tightly and does not fall out. This is a simply gorgeous piece made by a legendary smith. A true gem!