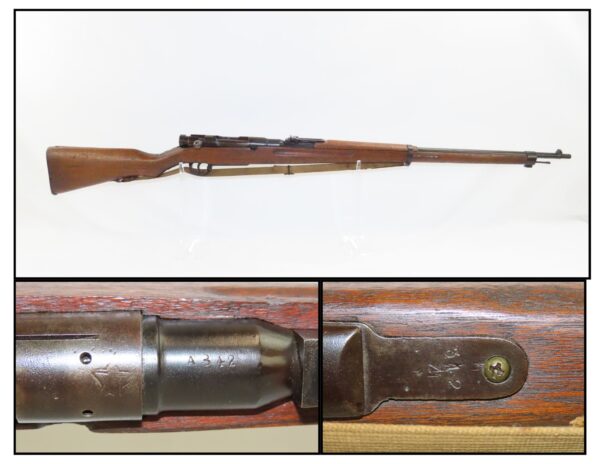 Here we present a Japanese Type 38 Training Rifle. The Type 38 carbine and rifle were bolt-action service rifles used by the Empire of Japan predominantly during the Second Sino-Japanese War and Second World War. The design was adopted by the Imperial Japanese Army in 1905 (the 38th year of the Meiji period, hence “Type 38”). Because the 6.5×50mmSR Arisaka cartridge it fired was considered underpowered, a replacement was devised, which was the Type 99 rifle, but both rifles saw usage until the end of the war. This design was the project of Major Nambu, famed and prolific firearms designer in Japan. The Type 38 has been called the best service rifle of WWII. The design was perfected with the advent of the Type 99, nevertheless, the Type 38 saw plenty of action during World War I and World War II.

This one is marked with a star over the breech and has matching numbers throughout. The bore has been bored smooth for use with blanks. The magazine spring and follower have been removed.

The overall condition is good. The action functions. The bore is dark. This example is missing a screw from the butt plate. Comes with a canvas sling.