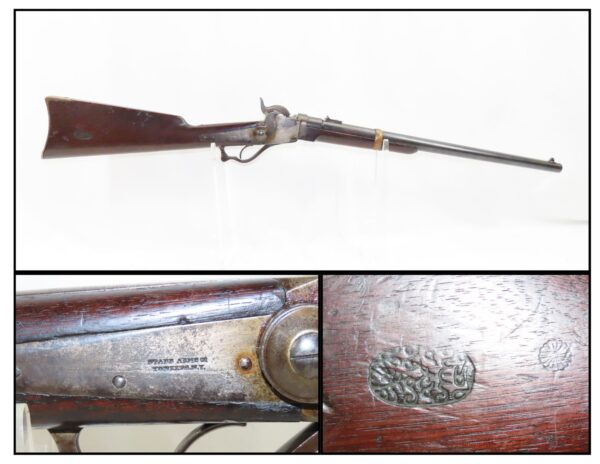 With Imperial Mum on Barrel and Stock

Here we present an antique Starr Arms Co. Saddle Ring Percussion Carbine with Japanese Imperial Markings on the barrel and on the stock, made circa 1863 in Yonkers, New York. The Starr carbine was a breechloading single-shot rifle used by the United States Army. Designed in 1858, the Starr was primarily used by cavalry soldiers in the American Civil War. The Starr Arms Co. manufactured 20,601 of these breechloading percussion carbines between 1862 and 1865.

Although the Starr carbine had proven to be effective during the Civil War, it was not successful during the trials of 1865 by the U.S. Army trials board, and no further rifles were ordered. During the war, the Starr Arms Company had been the fifth largest supplier of carbines and the third largest supplier of .44 caliber single action Army pistols. After the war had ended, and with no further government contracts, Starr could no longer compete with larger manufacturers like Winchester, Sharps, and Colt, and the company closed its doors in 1867. These and many other weapons used in the conflict were sold as surplus, and Starr carbines are one of the arms known to have been sent in some number to Japan as part of the government’s effort to modernize and westernize. Other popular weapons were the Pattern 1853 Enfield rifles, many of which were converted to breech-loaders.

These weapons were then in turn used during Japan’s own civil wars as a result of the Meiji Restoration of centralized power to the emperor: the Boshin War (27 January 1868-27 June 1869), Saga Rebellion (16 February-9 April 1874) and the Satsuma Rebellion (also called the Seinan War, 29 January-24 September 1877). These conflicts were depicted famously The Last Samurai (2003). These events were, in many ways, the ultimate result of the Commodore Perry Expedition—the forcible opening of Japan to American (and world) trade.

The overall condition is near fine. Original blue finish. Robust action. Nicely rifled, bright bore. Solid stock with average/expected wear. “H.G.S.” is stamped on the left side of the barrel. Imperial Japanese mums can be seen at the breech and stamped into the right buttstock. The other marking would appear related but we do not know the meaning at this time. A rare piece of 19th Century Japanese & US history!