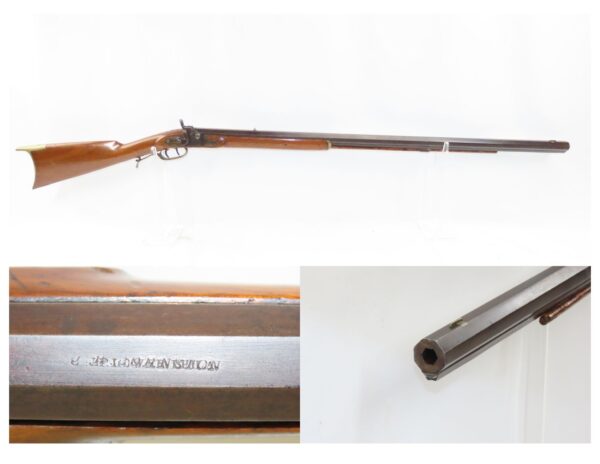 Here we present an antique J.P. Lower & J.H. Johnston Marked Percussion Long Rifle, made circa the 1850s in Pennsylvania. The barrel appears to have originally been stamped by J.P. Lower, who would later be of Denver, Colorado fame. Born in 1833 to a Philadelphia carpenter, John Pray Lower soon developed a much keener interest in firearms than carpentry. At 13 he began an apprenticeship with J.C. Grubb, a blacksmith turned gun dealer and trader, and by age 20 Lower had become a master gunsmith prior to moving to Denver. There he became one of the “Wild West’s most famous firearms dealers. He made a name for himself in a profession as essential, if not as glamorous, as that of the lawman or army scout. Lower stated that he had probably armed every Colorado Territory lawman, badman, Indian, and gambler. This marking is a bit hard to read because it was stamped with J.H. Johnston’s name right over top. When the war started, James Hampton Johnston moved to Pittsburgh and was appointed Master Armorer for the Union Army at the arsenal there. In 1866 after the war ended, Johnston established the Great Western Gun Works which grew to a $150,000 a year business by 1874. His success wasn’t by chance, and he stated that “success is not a result of mere chance, but the fruit of methodical business habits with strict integrity and honesty of purpose which distinguishes the character of all self-made men.”

Its stout octagonal barrel is in .34 caliber. It is equipped with double set triggers.

The overall condition is very good. Original finish on the barrel. The action remains strong. The bore is in good shape with strong rifling. The stock has two dowel type inserts behind the barrel tang—no break was detected so they might be simply to make this area stronger. There is a thin crack just ahead of the front of the lock. A very interesting rifle!