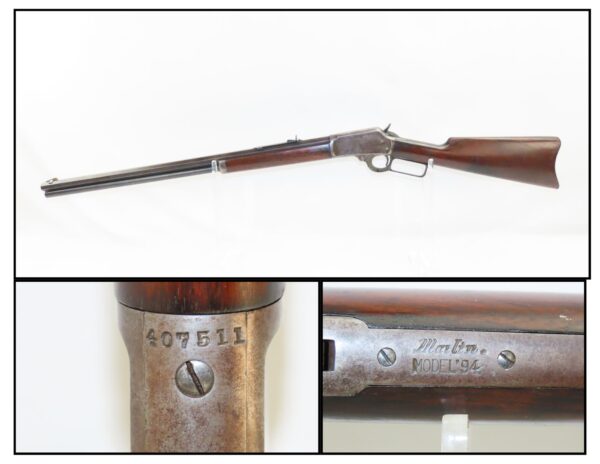 Here we present a J.M. Marlin Model 1894 Rifle in .38-40 WCF, made circa 1906-1934 in New Haven, Connecticut. Marlin was one of Winchester’s biggest competitors for the lever action market in the late-19th and into the 20th Century. Originally patented on August 1, 1893 by L.L. Hepburn, the 1894 featured a new locking bolt and two-piece firing pin, alongside an improved one-piece trigger and a short receiver that allowed cartridge compatibility with the 1888 and 1889 models. It features a solid top frame with side ejection and a smooth action.

The Model 1894 and its successors found favor in Canada, Alaska, and the Pacific Northwest, where precipitation combined with cold temperatures sometimes caused top-eject designs to freeze solid. During the Klondike Gold Rush, the solid-top Marlin design was preferred by many prospectors facing subzero temperatures and dangerous animals, since the solid top frame was better at keeping freezing rain, snow and dirt out of the operating parts of the action. Like its Winchester competition, it made a magnificent companion for a Colt revolver in the same cartridge!

The overall condition is fine. Original blue finish on the barrel and magazine with muted case colors on the frame, lever, and hammer. The action is strong and very lively. The bore is bright and in great shape with sharp rifling! All the marks are clear and legible. This is a rifle that would give the Winchester 1892 a run for its money!