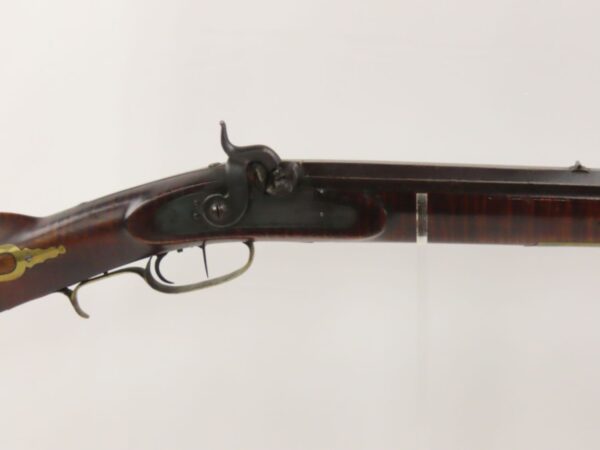 Here we present an antique Full-Stock Pennsylvania Long Rifle in .42 Caliber by John D. McKahan of Washington, Pennsylvania circa the 1850s. John D. McKahan was born in 1824 and was a gunmaker in Washington from around 1840 until the beginning of the Civil War. He served in his local militia, the “Washington Blues”, 3rd Brigade, 17th PA Militia from 1852 through 1856. On 20 April 1861, McKahan mustered into Co. “H”, 46th Pennsylvania Volunteer Infantry. Per the National Park Service unit history, the 46th would:

John would die July 25, 1864 of wounds received at the Battle of Peach Tree Creek, Georgia and was buried July 20th in Atlanta. However, the 46th would continue on to lay siege to Atlanta, occupy the city, before continuing on to the Carolinas. The regiment would be there for the surrender of Johnston’s Army on April 26 of 1865, stand for Grand Review May 24th and muster out July 16, 1865.

This rifle would have been used to hunt medium to large sized game or dispatching the enemy from greater distances than most other muskets could fire accurately at that time. This rifle features a heavy octagonal barrel in .42 caliber, large enough to take big game or a man. This rifle also comes equipped with double set triggers for a light and crisp trigger break. Wonderfully striped maple was used in the making of this stock and a large brass patchbox installed into the right side. This is one magnificent Pennsylvania rifle.

The overall condition is near fine. The action is strong and tight. The bore is in fabulous condition with sharp rifling. The markings are clear. A truly fine American made rifle that represents so much history!