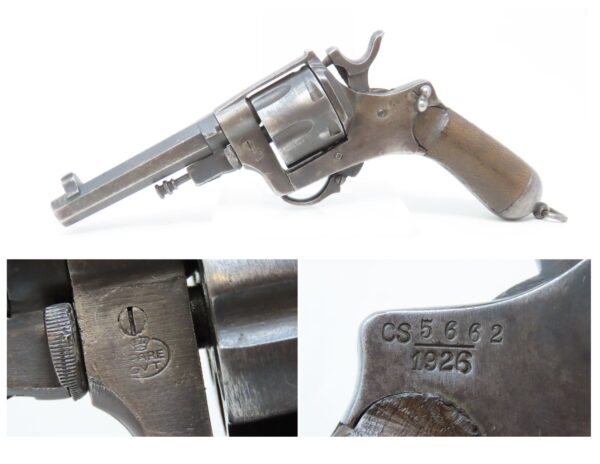 Here we present a C&R Italian “SFARE” Bodeo Model 1889 Soldier’s Revolver, made by the firm Societa Fabbrica Armi Regia (Royal Society Manufacture of Weapons” of G.V.T. in 1926 in Gardone Val Trompia, Italy. Made by a large variety of Italian gun-makers, this “SFARE” made Bodeo is much more uncommon to find.

It became the service revolver of the Italian Army in 1891. The revolver was named after the head of the Italian commission that recommended its adoption, Carlo Bodeo. It was produced in both Spain and Italy. The Bodeo was slated to be replaced when the Glisenti Model 1910 was adopted, Italy’s first semi-automatic to be adopted. However, the reliability of the Glisenti left much to be desired so that the Bodeo remained in production until 1926. Even when the much improved Beretta Model 1934 was adopted, the Bodeo stayed in service until the end of World War II. This revolver may have seen fighting during Italy’s conquest of Ethiopia (1935-36), the Spanish Civil War (1936-39), the invasion of Albania (1939), and World War II (1940-45).

There were two version of this revolver, one issued to soldiers that had an octagonal barrel, folding trigger and no trigger guard. The other was issued to field officers and NCOs and it had a shorter, round barrel and a traditional trigger and guard.

The overall condition is good. Excellent action. Bright bore with nice rifling. Sharp markings. Both grips are in good shape with wear from handling. Here is a really neat Italian revolver that saw the rise and fall of the Fascists in the mid-20th Century!