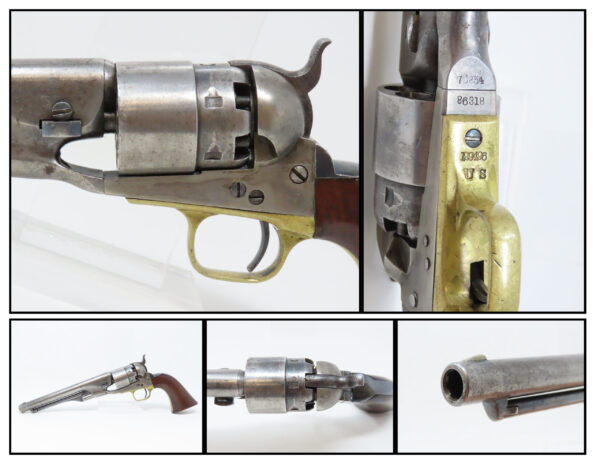 Here we present an antique Colt Model 1860 Army Revolver, with the frame manufactured in 1863. The 1860 Army was the single most used pistol of the American Civil War. Over 200,000 were made from 1860 to 1873, and 156,000 of those were made by the end of the war in 1865. They continued to be used by the Army up to and perhaps even later than the official adoption of the Model 1873 Colt Single Action Army revolver. This Colt 1860 Army Revolver survived the American Civil War to continue to be fielded on the Western Frontier by US Cavalry troops who were responsible for maintaining law and order in the territories, especially when it came to many native tribes who resented the constant encroachment of settlers on their way of life.

Like its successor, the US Model 1873 Colt Single Action Army, this 1860 Army was used until it was taken in for maintenance and re-armoring, then issued again. While there is no handy name such as the “Artillery Model”, which denotes the re-armored SAA, this 1860 Army likewise has mixed numbers from the armorer taking the best parts from many different revolvers to make one good and fully functional piece. A large “US” was then stamped on the bottom front part of the trigger guard as a further acceptance marking. You will notice that the bottom of the backstrap is not numbered as a bit of “new-old stock” was utilized. This part retains its original blue finish as a result. The frame has a cased colored frame that has become mostly silvered with time, though some of the colors are visible. The cylinder still bears some of the blue finish and the single letter inspector marks “G” and “D”. Located behind the trigger guard is the single letter inspector mark “H”. These are nowhere near as common as the Colt “Artillery” Model revolvers. It is a true representative of the post-Civil War period that was characterized by Reconstruction, Westward Expansion, the building of the trans-Continental railroad, the Indian Wars, and the continual issue of Civil War vintage, obsolescent firearms that were either modified or re-built to keep in service. A very neat piece of US history!

The overall condition is fine. Original blue finish on the backstrap and cylinder as described above. Some of the case colors are visible and some silvered. Mellow patina on much of the brass. The grips are solid, smooth and nearly fine with a small chip on each toe and heel. The action is crisp and the bore is in fantastic condition with sharp rifling. This is a beautiful example of a rare US issued Colt with tons of history! This is one you don’t want to miss!