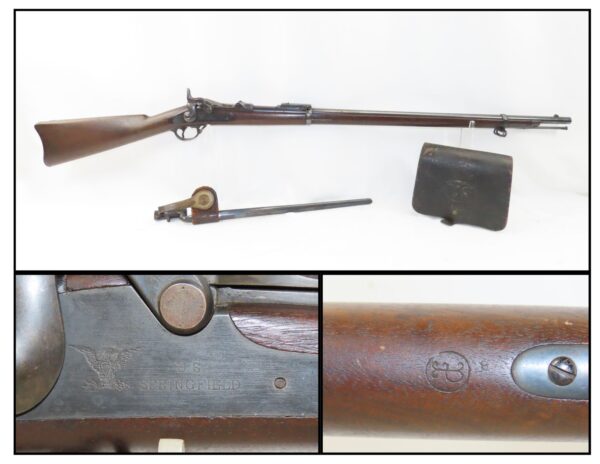 Here we present an antique U.S. Springfield Model 1879 Trapdoor Rifle, made in 1883 at the Springfield Armory in Springfield, Massachusetts. After the Civil War, the War Department wanted a breech-loading rifle. To be specific, it wanted a breech-loading rifle that would chamber a self-primed, metallic cartridge. Amazingly, despite the adoption of the ill-fated Model 1882 Chaffee-Reese Bolt Action Magazine Rifle, new models of trapdoor rifles continued to be produced and used all the way through the mid-1890s, until finally, the Krag-Jorgensen was adopted. The U.S. continued to see unrest and conflict with the displaced Native Americans during this time, including the Wounded Knee Massacre on December 29th, 1890. Trapdoors continued to see use all the way through the Spanish American War.

This example has a very clear 1883 dated inspector cartouche with the initials “SWP”, for Master Armorer and Ordnance Inspector Samuel W. Porter. Accessories include a scarce Pattern 1864 S.H. Young leather cartridge box and a socket bayonet with scabbard and hanger.

The overall condition is fine. Original blue and case colored finishes. Strong action. Bright bore with very nice rifling. The walnut stock is solid with less than average wear and shows a clear cartouche on the left wrist. The leather cartridge box is in very good shape. A fantastic Indian Wars Era kit!