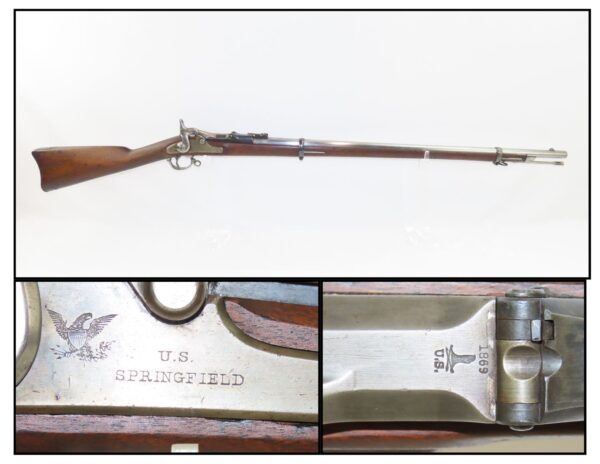 Here we present a Springfield U.S. Model 1868 Trapdoor Rifle, made circa 1869 in Springfield, Massachusetts for the U.S. Military. Over 51,000 Model 1868 rifles were produced at the Springfield Armory between 1868 and 1872. These arms feature the distinctive “Trap Door” breech loading system designed by Master Armorer Erskine S. Allin, who was the key to many military issued and experimental arms between 1865 and 1894. Some Model 1868 rifles, including this one, were produced with lockplates bearing the dates of 1863 or 1864, while barrels are dated 1869 or 1870.

The Trapdoor Rifle was the primary weapon in the U.S. military from the end of the Civil War to the end of the 19th Century, encompassing the Indian Wars and even the Spanish-American War in Cuba. It was still being used when the Springfield 1903 was adopted. These rifles were initially made by converting muzzle loading Civil War muskets to single load cartridges from the breech by installing a “trapdoor”. Later iterations were purpose built from the ground up and chambered for .45-70 GOVT, but these early conversion examples were chambered for the even more massive .50-70 GOVT.

The overall condition is very good. The action is strong and tight. The bore is mirror bright and in fine shape. The cartouche on the left stock is visible. There are a few repairs to cracks, but each remain stable. “US” is stamped on the buttplate tang. The lock is dated “1864” with “1869” being marked atop the trap door at the breech. A rifle with a history from the Civil War and beyond!