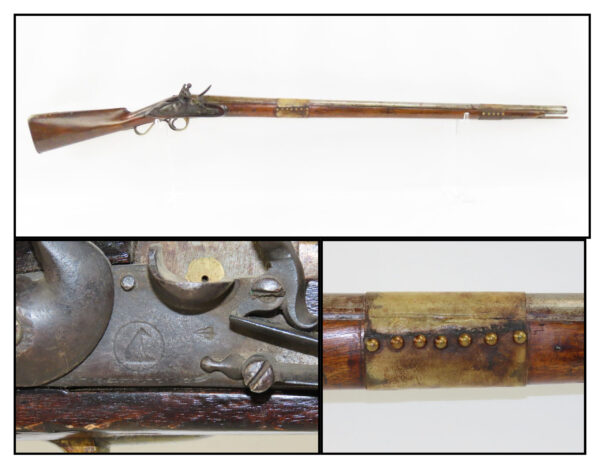 Here we present an antique Native American Flintlock Trade Musket by Hollis, made circa the early-1800s. This musket was made for the purpose of trading with Native American Indians by the British in what used to be known as the Northwest Territory in North America, which consisted of the northeastern portion of the US, around the Great Lakes and all around the Hudson River. The fur trade was a big business in North America for several of the world’s major powers at the time, including Great Britain, France, Holland, and more from the 16th through the 19th Centuries. The Indians were masterful trappers and trade thrived. These may also be knowns

The lock is marked “HOLLIS” at the tail and features a large seated and howling figure of a wolf in the center of a circle. The barrel has been secured to the stock by wide bands of hide and brass tacks. The hide has hardened with age and the fit is rigid. The smoothbore barrel is in .71 caliber.

The overall condition is very good. The action functions, although the hammer spring is weak—replacement of this part would make the action good as new; it is simple but we like to let the buyer decide what they would like to do in such cases. The bore is in good shape, smooth and gray. The stock has been neatly repaired about the wrist at some point. The stock feels and looks solid. “HOLLIS” can be read on the lock. Not many of these exist today due to the harsh conditions and use to which they were put. This is a fantastic example!