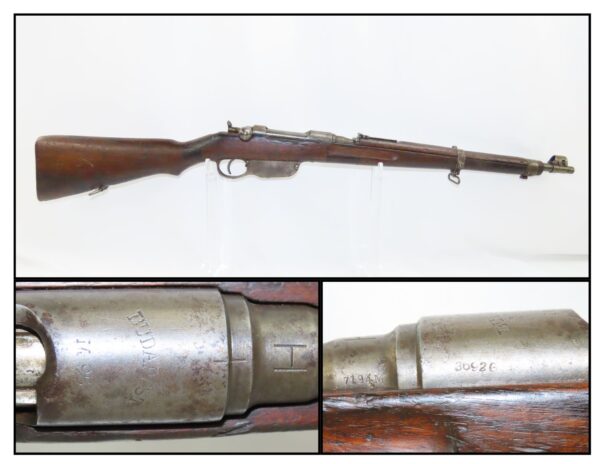 Here we present a C&R Hungarian Fegyver Arsenal Mannlicher Model 95 Straight Pull Bolt Action Carbine, made in the early 20th Century in Budapest, Hungary with a production run from 1897 through 1918. In the 1880s, the bolt-action rifle was a very innovative firearm. One of the leaders in the design of these guns was a man named Ferdinand Ritter von Mannlicher. Mannlicher inverted a straight pull, bolt action rifle that fed from an internal box magazine. The carbine was originally chambered for the round nosed 8×50mmR Mannlicher cartridge and used by cavalry units of the Austro-Hungarian Army as a replacement of the Mannlicher M1890 carbine. But, almost all of these carbines were rechambered to accept the more powerful spitzer 8x56mmR cartridge in the 1930s. It was initially adopted and employed by the Austro-Hungarian Army throughout World War I and was retained post-war by both the Austrian and Hungarian armies.

Based on his previous M1890 design, this rifle was manufactured in the Austro-Hungarian Empire at state arms factories in Steyr (Austria) and Budapest (Hungary). More than 3 million of M95 rifles were produced between 1895 and 1918. This rifle was issued to the Austro-Hungarian army, and, after the fall of the Empire, to the Austrian and Hungarian armies. A full-length wooden stock covered almost all of the metal surfaces to make it “soldier proof”. The straight pull design was so fast acting that the German soldiers that used the rifle in World War II called the M95 the “Ruck-Zuck”, meaning very quick.

The Austro-Hungarian Army issued the Model 95 and used it with effectiveness in World War I on no less that three fronts. While the army did not fare well during the great war, the soldiers said the Model 95 performed with great effectiveness. After the war, the Austro-Hungarian Empire went away, but the various countries that rose from the ashes, including Austria, Hungary, Czechoslovakia, Yugoslavia, and Rumania all kept their inherited Model 95s around for decades.

This one has been there and done that. The action functions properly all around, but was packed in cosmoline in the past and could use a deep clean. Dark bore, most likely due to excess cosmoline. Solid stock. The numbers are mismatched.