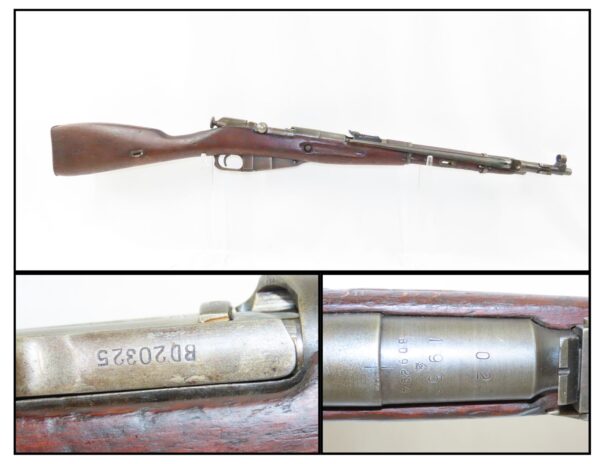 Here we present a C&R Hungarian Mosin-Nagant Model 44 Carbine, made in 1953 in Budapest, Hungary. The markings on the carbine show that it was made in 1953 in Budapest. This version was produced from 1949 to possibly as late as 1955. They were characterized by a high quality finish and “02” markings on various parts of the gun, which was the code for Hungary. This carbine was made during the build up of the 1956 Hungarian revolt which the United States didn’t support for fear of upsetting the USSR. It didn’t end well for the Hungarians.

The more well known Soviet Model 1891, known in the West as the Mosin–Nagant and in Russia as Mosin’s rifle, was a five-shot, bolt action, internal magazine fed military rifle developed from 1882 to 1891 and used by the armed forces of the Russian Empire, the Soviet Union and various other nations. It is one of the most mass-produced military bolt-action rifles in history with over 37 million units having been made since its inception in 1891, and, in spite of its age, it has been used in various conflicts around the world up to the present day. This Model 1944 is a variant of the original Model 1891. It was introduced into service in late 1944 (with 50,000 service-test examples produced in 1943) and remained in production until 1948. They were produced from 1943 to 1948 at the Izhevsk arsenal. Its specifications are very similar to the M1938, with the unique addition of a permanently affixed, side-folding cruciform-spike bayonet. A groove for the folded bayonet is inlet into the right side of the stock. These were in use not only by the Soviet Union, but also its various satellite nations.

The overall condition is good. Excellent action. Bright bore. Solid stock containing an expected amount of wear with no major damage (simple dents and dings). The numbers on the bolt do not match. “02” stamped on the right buttstock and barrel. Import marks on the left side of the barrel (obfuscated).