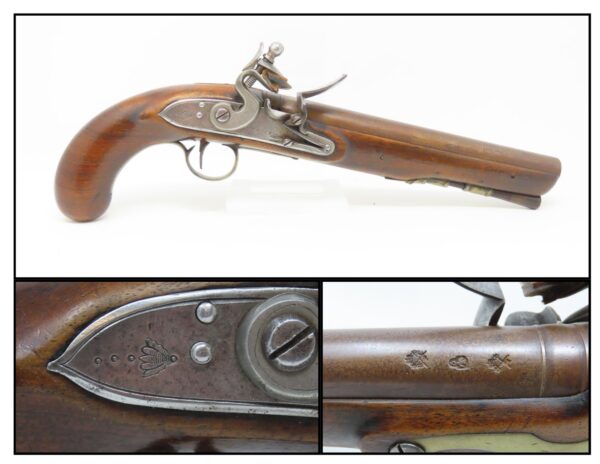 Here we present a small antique H. Nock Flintlock Pistol, made circa 1813 to 1818 in London, England. Henry Nock (1741–1804) was a British inventor and engineer during the Napoleonic period, but was best known as a gunsmith. Nock produced many innovative weapons during this era including the screwless lock and the seven-barreled volley gun, although he did not invent the latter despite it commonly being known as the Nock gun. He was a major supplier to the military during the Napoleonic wars.

As mentioned above, Henry Lock died in 1804, but his business was continued by his foreman and son-in-law James Wilkinson. Wilkinson became Gunmaker-in-Ordinary to the king in 1805. Contracts with the East India Company ensured the success of the business. The name became James Wilkinson & Son around 1818 when James’ son Henry joined the business, dating this pistol to the period between the post-1813 proof marks and the 1818 name change. Henry died in 1864 but the company continued making firearms and bladed weapons and became known as Wilkinson Sword. A series of new laws in the UK, starting with the Pistols Act 1903, restricted the sale of firearms to the public. That pushed the company into changing direction and it henceforth concentrated on razor blades and other domestic products. It continued to produce swords for the British Army and for royal ceremonial purposes until 2005 when the sword manufacturing plant in Acton, West London, was closed. The company continues to make shaving and gardening products.

This attractive pistol would have been suitable for dueling, personal defense, or military service. The breech tangs, locks, and trigger guard has floral scroll motifs suggesting they were designed for personal rather that military use. Its quality would have certainly been worthy of a military officer, and officers were known to use their pistols in duels with one another sometimes as much as on the battlefield.

The overall condition is very good. Strong action. The bore is in good shape. Solid stock with minimal wear! “H. NOCK” is engraved on the lock. “LONDON” marked a top the barrel. Here is an original flintlock pistol survivor to add to the collection.