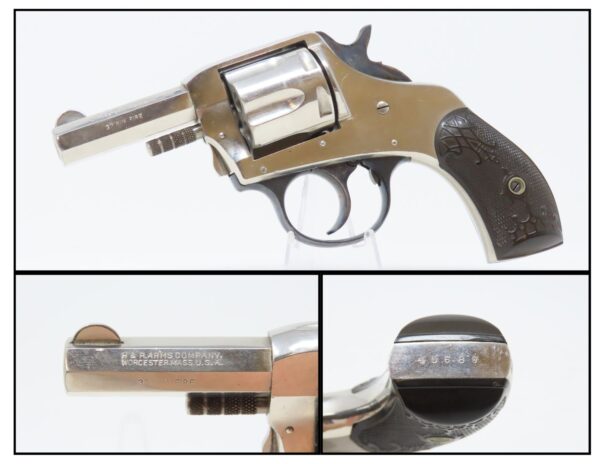 Here we present a C&R 2nd Model Harrington & Richardson Young America “Bulldog” .32 S&W Double Action Revolver, made circa 1910 with a production run between 1905 and 1923 in Worcester, Massachusetts. It is a medium frame, .32 S&W caliber 5 shot revolver. Both the first and second models were built on the medium frame. The Young America series had two frame sizes, which was the small 7 shot .22 rimfire and medium 5 shot .32 caliber which was chambered for the .32 short rimfire round. The first models that were made before 1904 are capable of shooting black powder loads only and will have no cartridge stamping. Those from 1905 through 1923 are capable of handling the higher pressures of the nitro/smokeless powders and will have the cartridge stamped into the left side of the barrel. It made a great companion in the early 20th century, a time that included the Great War, violent labor strikes, racial tensions, gangsters, Prohibition and the Roaring 20s.

The overall condition is excellent. Robust, tight action. Bright bore with deep grooves. Original nickel finish. Both grips are very good with minimal wear. Clear markings. Here is a fantastic revovler that would have been a good choice for a self defense minded individual in the early 20th century!