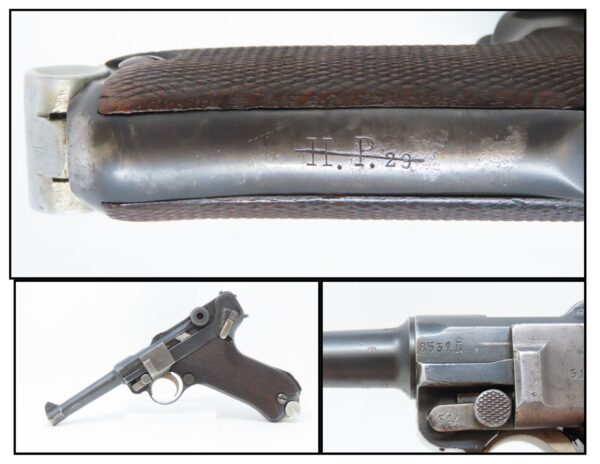 Here we present a World War II Era DWM P.08 German Luger Pistol, made circa 1929 by DWM in Berlin, Germany.

This is a nice, all original, early Nazi-era Sneak Luger that was produced circa 1929. These are typically termed “Sneak” Lugers due to their lack of chamber markings and their commercial proof marks, which the Nazis did to disguise their early rearmament efforts. This example has the correct blank chamber, but still retains the DWM marked front toggle assembly. It is supposed that these were also made up of old/new stock and those with manufacturer markings were already stamped.

This one gets even more interesting though. “H.P. 29.” (the original marking crossed out at some point) is on the front of the grip frame, which has been posited as a Police marking (Hessian or Hohere alternately). The right side of the barrel extension has the early single “WaA66” WaffenAmt indicating rework at the Mauser factory in 1929/30 along with the single “Crown/N” commercial proof on the left side. It has the standard extractor and safety markings. The Crown over N is a German pre-war proof mark used before April 1, 1940. This pistol may very well have been used by the police in Hesse up to a point, when it was repurposed and reworked for the Wehrmacht.

The overall condition is very good. The action is robust. The bore is bright throughout! Both grips are in great shape with expected handling wear. The numbers match. The magazine is a later replacement marked “MEXICO” on the aluminum base. This is a fascinating study of markings and history from a momentous period in world history.