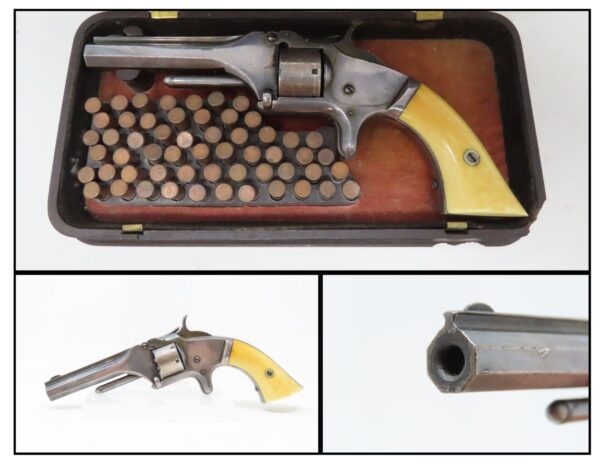 This case is quite a rarity. Very few have survived, especially in this condition as the choice of material is quite brittle. They were made for Smith & Wesson by Littlefield Parsons & Company. It is made of gutta percha, a hard-rubber-like substance derived from a tree that was in use for pistol grips and similar purposes in the mid-to-late-19th Century. This was molded with the figure of the revolver, the company’s information and the detail around the borders. The inside is lined with a burgundy-colored velvet with a fancy embossed portion on the inside of the lid. The lower portion of the case has space for a revolver and a block with spaces for ammunition. The cases themselves are extremely collectible!

The overall condition is fine. Lovely silver plate finish throughout. Solid ivory grips. The action is strong. The bore is reflective with good rifling. The gutta percha factory case has weathered the storm of the years very well, remaining solid and showing a few chips and tiny, hairline cracks. It comes with a fully loaded ammunition holder with original cartridges, many of which are somewhat corroded. This is a very rare little set!