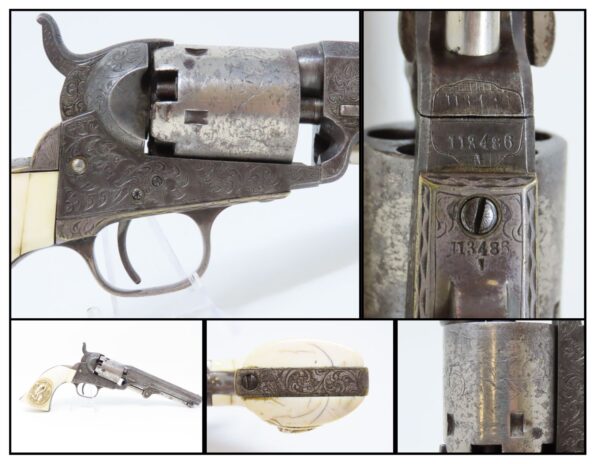 Here we present a Factory Engraved Gustave Young No. 2 Colt Model 1849 Pocket Revolver, made in 1856 in Hartford, Connecticut. The Model 1849 Pocket, the replacement for the Baby Dragoon, was the most widely produced of any Colt percussion pistol. Nearly 340,000 were manufactured during its 23-year production run that ended in 1873. Over 280,000 of these were produced by Colt’s factory at Hartford by the end of the American Civil War in 1865. These were very popular and saw a lot of use on the battlefield, on the home front and in the West. These were some of the smallest, handiest pocket revolvers of the time.

This one features Gustave Young’s signature “No. 2” style engraving and coverage. This entails the wolf’s head on each side of the hammer, as well as effusive curling scrolls on the hammer, frame, grip frame, barrel and loading lever. The largest scroll on the left side of the barrel reaches its terminus and features a mountain lion’s head. Likewise, on the right side of the frame, the center of the largest scroll contains an eagle’s head. Much of the background is punch-dotted. Each of the serial numbers is marked with an apostrophe ‘ , which was the Colt factory’s own notation from about 1854-1861 to indicate that the given piece would receive the special engraving and ivory grips. In this case, we do not simply have ivory grips, but high relief carved ivory grips featuring the iconic eagle clutching the serpent. Also, of note are the hand-engraved address on the top flat of the octagonal barrel, as well as the “COLTS PATENT” marking on the left side of the frame.

This revolver was featured in a Gimbel Brothers of New York auction in September of 1945 and comes with the original catalog. You will notice that the condition is virtually unchanged since it appeared in the catalog.

The overall condition is very good. Silver plate remains on the brass grip frame and trigger guard. The blued surfaces have turned gray with age and use. The cylinder and loading lever were at some point nickel plated, though not recently. The action is strong. The bore is in good shape with nice rifling. The numbers match. The ivory grips are smooth and in great shape. There is a small repair to the each side near the frame. This is a fabulous piece of functional art from 1856 that combined the inventive genius of Colonel Samuel Colt and prodigy master engraver Gustave Young.