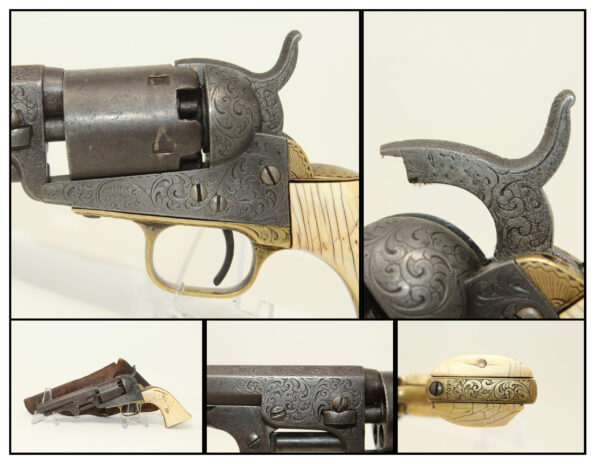 Made 1853, Engraved with IVORY & Leather Holster!

Here we present an antique Colt 1849 Pocket Revolver, made in 1853 in Hartford, Connecticut. Over 280,000 of these were produced by Colt’s factory at Hartford by the end of the American Civil War in 1865 and 325,000 total made by the end of production. These were very popular and saw a lot of use on the battlefield, on the home front and in the West. These were some of the smallest, handiest pocket revolvers of the time.

This early 1849 Pocket Revolver was factory engraved by the famous and trend-setting master engraver Gustave Young. Gustave Young was one of many German immigrants who came to the United States and worked in the firearms industry. However, Young’s talents were most assuredly in engraving and his style set him apart from his contemporaries. This influx of German engravers starting in about 1850 was perhaps the beginning of what R.L. Wilson has called the “golden age of arms engraving in America”. Other names such as Bodenstein, Helfricht, Nimschke, and several Ulrichs would also make their enormous contributions to the craft, imparting their Germanic influence and become legends as well. Wilson goes on to say that “Young is generally considered to have been the best arms engraver active in 19th Century America.”

Young was “Colt’s chief engraving contractor from 1852-1869.” His telltale design motifs include animal heads around the barrel wedge, as this one displays on the right side (dog’s head), as well as on the sides of the hammer. More generally, the engraving on this piece features broad, flowing floral scrolls throughout the frame, barrel and hammer, to include the grip frame and trigger guard. This one has been stocked in ivory. A small punch dot under the numbers was a mark at the factory separating this revolver for this special project. Unlike the standard Model 1849 revolvers, this one has a hand engraved “Saml Colt” signature barrel address. It comes your way with a lined, pebble-grained brown leather flap holster that looks as though it saw a lot of use.

The overall condition is very good. The iron parts’ blue finish has turned an even gray with age. The brass has a mellow patina. The markings are clear. The numbers on the grip frame, trigger guard, frame, barrel, and cylinder match. The barrel wedge is numbered “7400”. The ivory grips are yellowed with dark striations throughout. There is a chip out of the right side and the heel. The bore is dark with sharp rifling. The action is excellent. Here is a fabulous opportunity to own the art of one of America’s most famous, prolific and influential engravers!